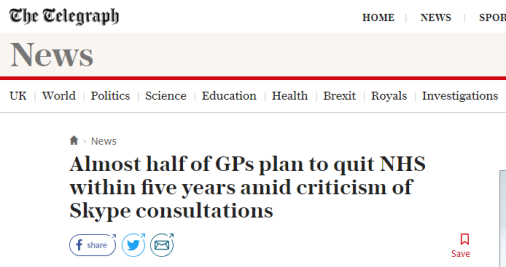 In the Torygraph today:

‘Almost half of GPs say they plan to quit the NHS within five years, amid complaints about the rise of Skype consultations. Research by the University of Warwick suggests the number of family doctors intending to retire or leave the health service has risen by almost a third since 2014.’

Scotland’s GPs seem strangely quiet on this, leaving Reptilian Scotland with no alternative but to make up a story about patients not being prescribed enough dangerous drugs, to fill today’s ‘Emergency Word Scotland.’

Talking-up Scotland have decided not to doorstep the Health Secretary on how one guy told them he might resign but we have just done the effin research ourselves. Please read and summarise the evidence presented in these recent reports then just go for a nice walk:

Why did BBC Breakfast pretend GP staffing figures for Scotland are not available?

No GP Crisis in Scotland but..

In the Scotsman today, 93% of Scottish patients get appointment with GP within 2 days!