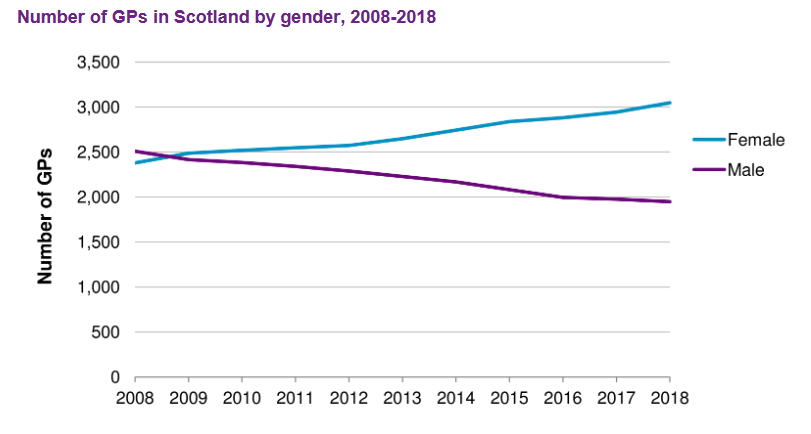 There are now 75 more GPs in Scotland than in the previous year and less than one third of them are over 50. However, the major growth has been in the number of women in the profession. This is very good news as there is convincing evidence that women doctors tend to be more effective than their male counterparts.

First, in a Canadian study of GPs:

‘Female doctors provide a better quality of care than their male counterparts, according to a new study. Canadian research found that female GPs tended to spend longer with patients, were more likely to prescribe recommended medication and referred more patients for further examinations.’

Note: The Daily Mail is the preferred source, bedtime reading and guide to writing for BBC Reporting Scotland staff.

Second in a US study of hospital doctors:

‘Patients treated by women are less likely to die of what ails them and less likely to have to come back to the hospital for more treatment, researchers reported Monday. If all doctors performed as well as the female physicians in the study, it would save 32,000 lives every year, the team at the Harvard School of Public Health estimated.’

Third, with particular regard to the treatment of older patients:

‘In a study that is sure to rile male doctors, Harvard researchers have found that female doctors who care for elderly hospitalized patients get better results. Patients cared for by women were less likely to die or return to the hospital after discharge. Previous research has shown that female doctors are more likely to follow recommendations about prevention counseling and to order preventive tests like Pap smears and mammograms.’

Fourth, in the bloody domain of the, sometimes, narcissistic, risk-taking, macho surgeon: