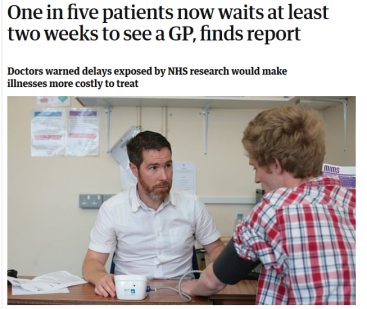 I do hesitate to make these comparisons between NHS Scotland and NHS England as they always go one way and I then start to feel a bit uncomfortable. However, if I want to talk-up NHS Scotland in a defence against our Loyalist media bias, it’s the only readily available comparator with a Tory government to blame for it all.

Anyhow, the Guardian piece above, does carefully and unusually, state that this is about only England, based on NHS England research.

So dear reader, how do you think things are in Scotland? Could be better, but health provision like education or policing is infinitely improvable and so could always be better. What is clear though is that there is no crisis in general practice in Scotland.

From research published in the Scotsman on 25th April 2018:

‘More encouragingly, it also found 87 per cent of people found it easy to contact their GP practice, while more than nine out ten (93 per cent) were able to get an appointment within two days.’

2. GP vacancies in Scotland are only just over one-third of the level in England

Based on a survey by the GP magazine on 6th July 2018, Pulse, the Independent reported today:

‘GP vacancies (in England) rise to record levels despite recruitment pledge, survey suggests. Long patient waits and unsafe, rushed appointments are unlikely to end any time soon as vacancies have risen from 9.1 per cent to 15.3 per cent since the (UK) government pledged 5 000 more doctors.’

3. There are significantly more GPs per head of population in Scotland

So, the ratio of GPs to overall population is:

4. The Scottish Government is taking steps to ensure there are more GPs, and doctors in general, coming through the system.

6 thoughts on “No GP Crisis in Scotland but..”