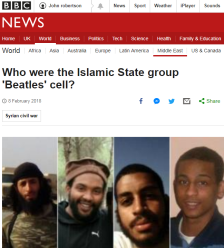 ‘This is a shocking new development as ISIS in Glasgow (ISISIG) seeks to add a ‘contributory factor’ to the many already ‘associated with’ patients dying ‘after’ they might have been ‘in contact with’ a fungus which might have come from some pigeon ‘shit.’ Scottish Labour have demanded that the Scottish Government now reconsider its hasty decision to licence airguns.’

The Disclosure Team had been following suspected Scottish White Supremacists, Celtic Connections, but, as in the recent case where they followed the wrong lorry of wee calves all the way to Spain before they realised their mistake, they found themselves following a group claiming to be the family of a ‘consultant paediatrician’ at the hospital. Unphased, the team observed the children in the group feeding feral infected pigeons and found out from them, that they and others, had done the same at another Glasgow hospital. Though at first, satisfied that these children had no terror connections, the team had second thoughts when their ‘father’ emerged humming a Beatles tune and telling his children how much he loved ‘The Beatles.’ Readers familiar with terror reporting will know of course that this is code for support of ISIS and its English Jihadi killers known as ‘The Beatles.’

The BBC Team have passed on their observations to GCHG, MI5, MI6, AC12, CIA, FBI and the polis. They now plan a new documentary with the possible title:

‘How Glasgow’s Jakies are combatting its Jihadis by shooting their suicide pigeons.’