Ruth Davidson’s return to politics today saw her on both Reporting Scotland and the main news where they’d all really prefer to be.

We heard again that she doesn’t want to be prime minister. Is there any evidence that anyone outside of their media bubble seriously think she could or should be? She has never won a first-past-the-post election, her branch of the party has never proposed a policy that has been adopted in at least ten years and she looks like presiding over terminal decline as the SNP swallows Labour and Brexit/UKIP bite her party in half. By all objective measures she has nothing beyond some alleged cheeky charm, and the pretend confidence of a third-team scrum-half.

I know why they like her, though. She seems to prefer the status quo with none of the unsettling changes offered by Corbyn/Leonard, by Farage/Johnson or, of course, by the SNP. The senior staff at the BBC long for a pre-Iraq Blairite Britain where you can pretend to care about the poor, even a do a wee bit for them, as long as you and your offspring can continue to benefit from the pretend meritocracy, where you can keep your pay differentials, where you can enjoy being part of sophisticated European culture and where you can hope for promotion to places where you might report on Britain as it projects itself globally. You might go to New York, Moscow, Paris or Beijing. You might even interview, and be seen doing so, the premiers of the leading powers. When you read politics at Glasgow, Edinburgh or Saint Andrews, you didn’t dream of reporting on farming subsidies in the Western Isles.

So, on BBC 1 News, we had a full two-minute interview with Scottish Labour-appointee, Sarah Smith, where Ruth was able to say with regard to a second independence referendum: 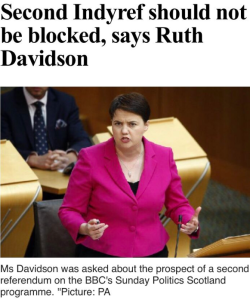 Surely any half-baked interviewer might ask why she feels she is in a position to ‘say no’, as a leader of an unpopular minority party and why he has changed her mind (above).

Then Sarah tells us:

This line keeps being repeated but only by journalists repeating what other journalists are saying based on the kind of sentiments discussed above. It’s just rubbish. When Ruth modestly declines, you’re left to wonder why on earth is that news and even news that has jumped out of the place where we live into the Big World of Westminster?

Perhaps most obviously absent was the returning leader of the Scottish Conservatives not being asked how she might react to the current existential threats being posed to them, in evidence from several polls, suggesting an SNP surge and clear inroads being made into their support even in Scotland by Brexit/UKIP.

On Reporting Scotland, Ruth was, surprise, surprise, the headline act, denying us a referendum again but best of all, we heard:

‘She intends to replace Ms Surgeon as First Minister at the elections in 2021.’

Good grief! The most recent YouGov full poll puts the SNP 23 points ahead with more than double the support of the Conservatives! Will anyone mention this? If it was reversed and they were interviewing Sturgeon, would they take off the gloves? Will they ask her about membership or the likely attendance at the forthcoming conference? No of course not. Don’t be daft.

Then when Brian does ask if Brexit has changed everything, with regard to second independence referendum, she ignores the question. He just lets it go.

Finally, Brian returns to the story that some Tories still hanker for Ruth to choose Westminster over Holyrood. Who are these people? I’ve never heard anyone, of any significance, say that.

11 thoughts on “Empress Ruth has no policies, but all at the BBC worship her empty charms”