BBC 1 has been in overdrive on this story as have the ‘newspapers.’ BBC Scotland has been quiet on it. You’ll remember how much the public really needed to know more about Scotland’s (fake) obesity crisis back in November 2018:

Don’t we have a diabetes crisis to inform the public about? Too much of a challenge to make one up?

Diabetes going into decline in Scotland? 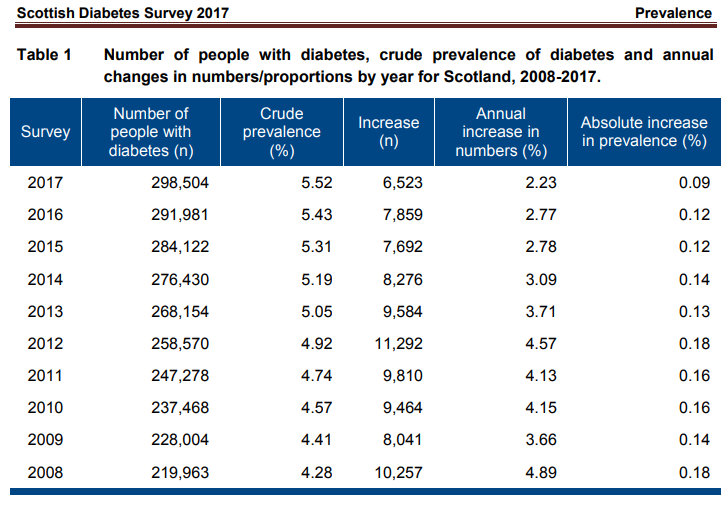 Though the 2 751 decline is a small figure compared with the expected increase of around 7 000, they combine to make a c10 000 turnaround in the trend. The smaller increase in 2017 compared to 2016 may also suggest the beginning of the trend.

Diabetes and obesity together in decline in Scotland?

So, what could be causing this? As you know, obesity is a major factor in the increase of Type 2 Diabetes across the globe. Obesity is also increasing across the globe, but the rate of increase is flattening out in one country, Scotland, and government initiatives have been identified as key probable factors in this.

In their public anxiety drive on obesity in November 2018, BBC Scotland ignored two pieces of reliable research and rejected my complaint regarding their distortions.

Research from the London School of Hygiene and Tropical Medicine, reported in the Independent on 26th May 2018 suggested:

I appreciate that the trend graph relates to combined male and female obesity, but the table below shows that for other than two groups, the prevalence of obesity in Scottish women is expected to be significantly lower than that in England or Wales and notably much lower for the 15-24-year-olds most likely to have experienced, in schools and colleges, the ‘Scottish Government policy initiatives and resource allocation.’

Published on the 26th November 2018 but ignored by the Nomedia, new research findings supported the London School findings:

From Growing Up in Scotland: Overweight and Obesity at Age 10:

‘Historic data from the survey shows that the prevalence of overweight [in Scotland] including obesity remained relatively stable between 1998 and 2016, fluctuating between 28% and 33%. However, in recent years levels of obesity have shown a steady decline dropping from 17% in 2014. This is largely due to a decline in obesity amongst boys which has dropped from 20% in 2012 to 12% in 2017 [40%].’(14)

‘The results are broadly comparable with similar UK research. For example, analysis of data from the Millennium Cohort Study showed that the proportion of healthy, overweight and obese 5-year olds becoming or remaining obese by age 11 were 6%, 32% and 68% respectively (Mead et al, 2016). Comparative figures from analysis of administrative data from the National Child Measurement Programme (NCMP)13 in England were 8%, 43% and 77% (Copley et al, 2017).’ (25)

‘Food available in and around schools has also been a focus of policy aimed at improving children’s diets. Legislation requiring local authorities to ensure schools provide food and drink of an appropriate nutritional standard has been in place since 2007 with accompanying guidance’ (17)

‘Progress towards achieving the goal of a more active population has been made through a range of activities in recent years including the implementation of the National Walking Strategy (Scottish Government, 2014c), the Cycling Action Plan (Scottish Government, 2017b), the Active Schools programme, Community Sports Hubs and the Legacy 2014 Physical Activity Fund10. Of particular relevance for children and young people is the Scottish Government’s commitment to expanding the Daily Mile to ensure that Scotland becomes the first ‘Daily Mile nation’ with roll out to nurseries, schools, colleges, universities and workplaces. Recent research results suggest the Daily Mile is effective at increasing levels of moderate to vigorous physical activity (MVPA), reducing sedentary time, increasing physical fitness and improving body composition.’ (17/18)

Do we need to help BBC Reporting Scotland, again:

2 thoughts on “As diabetes falls for the first time in Scotland why is BBC Scotland quiet?”