At 06:26am and repeated six times throughout the morning:

‘Cancer specialists say obesity is set to overtake smoking as the biggest cause of preventable cases of the disease in Scottish women. Cancer UK’s report focuses on data from across the UK, but prevention experts say the results are expected to be the same in Scotland. It’s urging the Scottish Government to press ahead with plans to restrict supermarket special offers on junk food.’

This report is missing crucial information, from May this year, on scientifically produced estimates contradicting the mere ‘expectations’ of anonymous ‘prevention experts’ and illustrated in the graph above.

Based on research led by Laura Webber of the London School of Hygiene and Tropical Medicine, reported in the Independent on 26th May 2018:

I appreciate that the trend graph relates to combined male and female obesity, but the table below shows that for other than two groups, the prevalence of obesity in Scottish women is expected to be significantly lower than that in England or Wales and notably much lower for the 15-24-year-olds most likely to have experienced, in schools and colleges, the ‘Scottish Government policy initiatives and resource allocation.’ 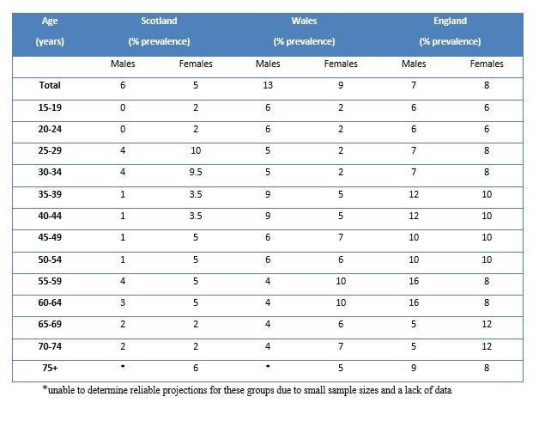 This is classic propaganda and bias by omission. It’s quiet and slips smoothly into the subconscious mind like a hypodermic needle. BBC Scotland know of the research by Laura Webber of the London School of Hygiene and Tropical Medicine because they reported on it, at the time, but only partially so as to obscure the Scottish Government’s role. I complained but got nowhere.

‘You’re no different from the rest of the UK’

‘Your government is absent here.’