‘They don’t always report the news, though they like to pretend they do. Sometimes they just make it up.’

My own words a few days ago as the moral panic and scare story around hospital infections generated primarily by Reporting Scotland, became apparent:

How Reporting Scotland INVENTED a crisis of infected hospitals for us

Now, after Freedom of Information releases, we can see that the supposed widespread fear and anxiety, around the assessment of P1 pupils, last year, had all the lack of substance of most moral panics or scare stories. We’ve already reported today on the lack of evidence of parents, teachers or academics being sufficiently concerned as to write and condemn the testing, leaving us with only the unsubstantiated pronouncements of those typical moral guardians and careerists, opposition politicians, teacher union leaders, parent groups and those journalists imbued with unionist positions. See these for more detail:

Only two academics wrote to Swinney and Sturgeon on P1 testing, both to approve and one looking for a job

Now everyone, including the Scottish Government, knows that an essentially media-bound frenzy is not the objective basis for a national review but such is its power, they agreed to one: 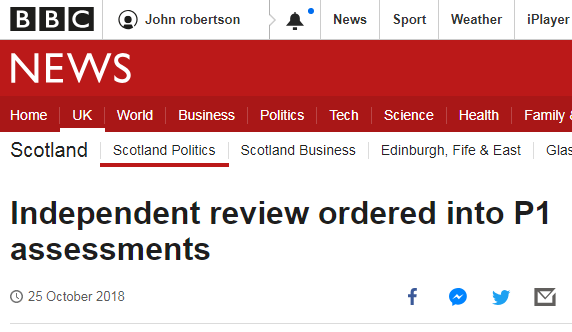 To repeat myself, this is a classic moral panic and a classic scare story with political and base human emotions, not science or reason, at its origin. The reporting and not the presence of fear and anxiety among pupils, parents and teachers, caused the inquiry.

In this case, unable to ‘lay a glove’ on the most competent and popular government in Scotland’s history, the corporate media in cahoots with the opposition parties and union leaders, is using Schools to conduct a proxy propaganda war against the whole idea of an independent Scotland capable of running its own systems.

When they cannot find a real problem within an infinitely improvable public service such as education or health, where such do often emerge, they are prepared to go well beyond any form of responsible journalism, to actually construct part of the reality of their readers’ lives.