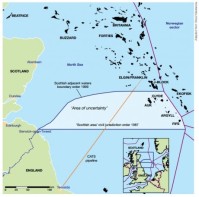 The new Glenform oil and gas field is supposedly a biggie. It has £2bn worth of oil and enough gas for around 5% of the UK’s annual gas demand. I suppose 5% might help keep the Russian wolf at bay, slightly. The new field west of Shetland would do 100% of Scotland’s annual gas demand so maybe we should be generous and let England have Glenform? The border redrawing to grab some more of the North Sea for
England, under New Labour, doesn’t seem to have been bold enough to, capture the Glenform field.

We’d still have 90% of all the gas and oil along with most of the UK’s renewable sources, 255 of all of Europe’s wind energy  and as you can see above, far greater maritime territory.

It sounds great. Read this, in the Guardian today:

‘A Chinese-led consortium has discovered the UK’s [sic] biggest gas-field in more than a decade, leading experts to say there is life yet in the country’s offshore sector. Drilling found the equivalent of about 250m barrels of oil could be recovered from the Glengorm reservoir in the central North Sea, about 5% of the UK’s annual gas demand. The Chinese firm CNOOC owns 50% of the Glengorm project, with a subsidiary of the Italian company Edison holding another 25% and the French oil firm Total owning the other 25%. The size of the find is the biggest since the Culzean find in 2008, and 11th largest of any kind in the UK in the past 30 years.’

Come one, be generous, given them something.

23 thoughts on “Could we, should we, let England have this new oil and gas field as a going-away present?”