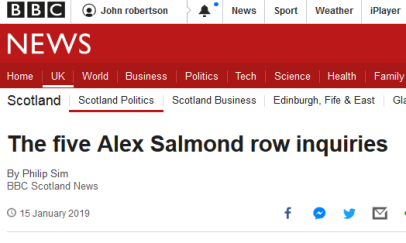 Even if Reporting Scotland, STV and the ‘Scottish’ press do their worst to keep the ‘Five Trials of Alex’ show running for months, to compete with Game of Thrones, how likely is Paul Hutcheon’s prediction, popular with other Yoons, that it will wear the SNP administration down?

Well it clearly hasn’t done so far as the most recent YouGov poll puts the SNP up at 40%, in a position to increase their seats by around 10, from 35 to 45 with Labour likely to become almost extinct again:

But, wait, can we learn anything from the past? Remember the Great SNP Civil War of August 2018? It must have been a big thing back then. Look at the mass coverage:

Surely that must have dented the popularity of the SNP? Let’s check the opinion polls in the period immediately after it:

Oooh, the SNP crashed down to as low as 36.5% in the October Survation poll! Oh, no, they seem to have recovered toward the end of the month, back up to 40%. They’re still at 40% with a bigger sample and that would give them an extra 10 seats, back up to 45. Worse still, Labour look like collapsing to 21% and get only one MP. Well! You’d think nobody was reading Paul or the Scotsman!

You have to admire their tenacity if not their mendacity. Remembering nothing and apparently learning nothing, each new juicy ‘SNP crisis’ sets them off again, like a pack of yapping jackals, with more daft predictions. They just don’t get the basic fact that the SNP, fixed hard to the philosophical principle that the desire for independence is of its essence and non-negotiable, will survive any personnel changes or other superficial set-backs. It’s not like the other parties, for whom there is no such equivalent. These are their values. If you don’t like them, they can change them.

Wait, what about the wider independence movement? Surely, those non-SNP folk must get scunnered by Sturgeon and Salmond?