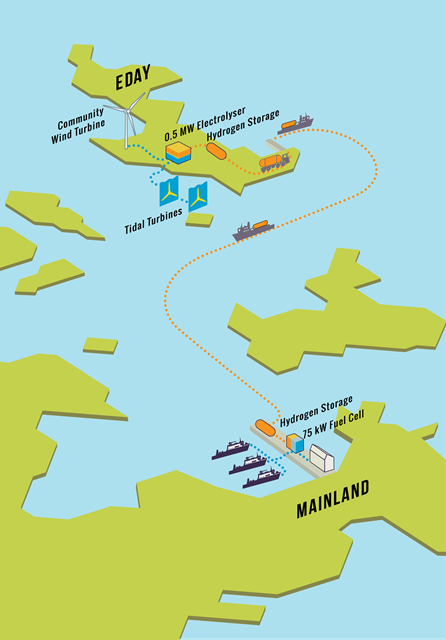 This could turn out to be a key moment in the move toward 100% reliable renewable energy use. Tidal power generation is constant and powerful. Hydrogen is ‘green’. Hydrogen can be stored. Hydrogen can be used to power all sorts of vehicles such as Aberdeen and London’s buses. See:

As world’s largest tidal energy plant in Pentland Firth generates 1GWh which is enough for 700 000 homes, will Scotland become the most energy-rich country in Europe?

Suddenly there’s a brilliant alternative to oil rig decommissioning costs. You can store Scotland’s surplus renewable electricity with it and it’s low-tech.

For the first time anywhere in the world, the Scottish Government’s £3 million-funded European Marine Energy Centre (EMEC) has produced hydrogen gas using electricity generated from tidal energy, in Orkney. Here’s how it works as explained in the EMEC report

‘By harnessing the power of the tide at EMEC’s tidal energy test site at the Fall of Warness, Eday, Orkney, prototype tidal energy converters – Scotrenewables’ SR2000 and Tocardo’s TFS and T2 turbine – fed power into an electrolyser situated next to EMEC’s onshore substation. Supplied by ITM Power, the electrolyser uses the electricity to split water (H2O) into its component parts – hydrogen (H2) and oxygen (O2). The electrolyser is housed in a standard 20’ by 10’ ISO container with hydrogen generation capacity of up to 220kg/24hours.’

Remember, this was done with electricity from one marine turbine in the Orkneys. There’s a four hundred marine turbine field being built in the Pentland Firth.