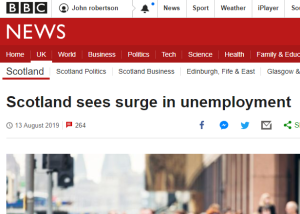 Though typically headlined by BBC Scotland as ‘Scotland sees surge in unemployment’, the increase was only 3.6% for the period April to June after a longer period of more than a year falling below that of the UK:

16 years-old statistics pupils will of course tell us that a three-month change is not a reliable indicator of a trend. Has anyone at Reporting Scotland passed mathematics at O, Standard or National 4 level? 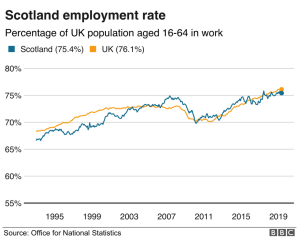 Other good news: The employment rate of 75.4% was close to the highest figure on record – 75.9% and very near to the UK rate despite the latter being distorted by the rate in the hyper-subsidised South -East and London..