Clustered together here on the website but dominating the TV broadcast headlines over the last three days, this very selective picture of Scotland can only dampen the spirits and we know that dampened spirits don’t vote for change. Often, they don’t vote at all, leaving the 20% of Scots who don’t really give a damn about anyone else to vote Tory.

Bad news too but less gut-wrenching and less suggestive of a failed community. 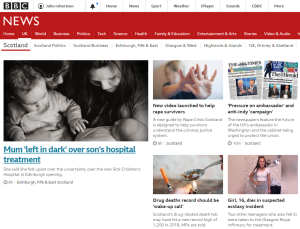 7 thoughts on “BBC Scotland gives you sick children, unsafe hospitals, drug deaths and more drug deaths: You want independence? At a time like this?”