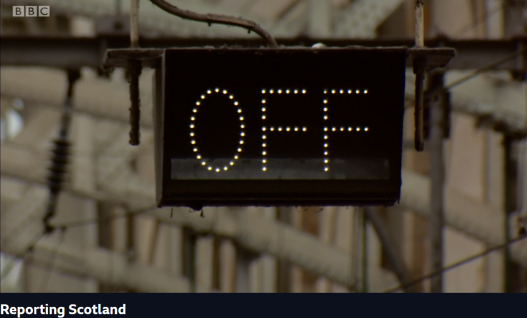 In a report ostensibly triggered by Scotrail improvements, Reporting Scotland were to present a very negative picture. Opening with this:

but over the above image, we got some early warnings that all was not going to be joy and celebration.

Before I go any further, I need to give the conspiracy theorist disclaimer. There was none. I didn’t and won’t say there ever was one. After years and years, this way of reporting comes naturally to the team at Pacific Quay and elsewhere in our MSM. It feels right to them. I know from twitter exchanges with a few of them that they absolutely do not believe they are biased. That’s why its perfect propaganda.

I had to laugh at the ‘OFF’ combined with news of improvements. Why ‘claims’ we wonder when these are transparent data entirely open to public scrutiny? It’s the kind of almost automatic insertion that tells you the unconscious mind of the writer of that sentence was already pre-disposed to be negative, untrusting, about the source of the figures. When you then hear the presenter say ‘months after’ you get another taste of this negativity. She sounds like a disappointed parent when a child has cleaned up their room ‘months after’ she told them to. It will be here for a few hours:

So that’s the headline. Let’s have a look at the report and, notably how much or little was about the headline news of improvements. There were 21 statements by presenters and the Scotrail representative but only 11 of these were about the actual improvements which had triggered the report. The other 10 were repeated reminders of ‘a grim new year’ of ‘waves of cancellations’ and of ‘packed trains.’

So, Mr and Mrs Henderson, having watched the report, how do you think Scotrail is doing?

‘Doing? They’re terrible! Always late and always overcrowded! I blame Nicola Sturgeon. What, they’ve improved since the New year, six months ago? I should think so too. Six months to sort things out? Disgraceful……………………………