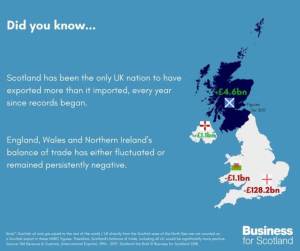 ‘Oil and gas drove the value of Scotland’s experts to the EU up by 18.6% over the last year, according to Treasury figures. Whisky was also a big factor in the rate of increase which outstripped every other part of the UK, which had an overall rise of 12.9% – £3.8 billion. Total Scottish exports now account for a record-high £32.8 billion, with more businesses exporting goods than ever before. In the first quarter of 2019, 4,950 Scottish businesses exported abroad, 229 more than the same period in the previous year. Fossil fuel exports increased in value by 36.3% to £12.5 billion, with beverages including whisky increasing by 7% to £4.4 billion.’

Note: The EU single market and customs union is eight times bigger in population terms than the UK market.

The rate of growth in the Scottish economy has overtaken that of the UK, according to official statistics. Figures published on Wednesday show that in the fourth quarter of last year, Scotland’s GDP rose by 0.3%. It is above the GDP growth for the UK over the same period, which was 0.2%. The value of Scotland’s GDP is estimated at £178.6 billion, or £32,800 per person, including oil and gas extraction in Scottish waters. Analysis suggests the most influential industry sector in Scotland last year was in manufacturing, with output increasing by 3.2% in total. On average, over the three years from 2015 to 2017, Scottish GDP has grown by 0.8% a year. The growth in 2018 (1.3%) is higher than the recent average growth rate, indicating an improvement in the economy.’

Unemployment in Tory UK is 15% higher than in Scotland

Unemployment in Scotland below UK level and employment better paid

Or see below the merciful other reality of employment in modern Scotland?

2 thoughts on “Scottish exports to EU increase by 18.6% in one year leaving UK figures well behind”