Here’s the 14th paragraph in the iNews report today. Our other NoMedia had the same information: 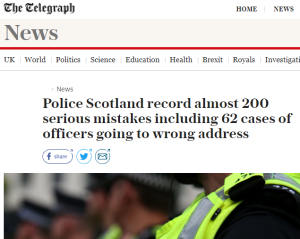 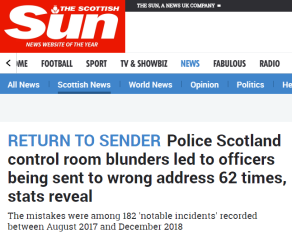 Well down and far away from cursory readers and headline limiters:

‘Over the 18-month period, Police Scotland dealt with 3,425,123 emergency and non-emergency calls, meaning that the notable incidents equated to fewer than 0.006 per cent.’

They all opened with ‘in the public interest of course’, this:

‘Police Scotland call handlers and control rooms made almost 200 serious mistakes in the space of 18 months, including dozens of cases where officers were sent to the wrong address. The national force recorded 182 “notable incidents” between August 2017 and December last year, according to figures published following a Freedom of Information request.’

Liam Kerr, MSP, said: “This research sets out scores of cases which, frankly, should never have happened”.

Kerr is of course correct in his use of ‘scores’. There were ‘nine score and two’ as they used to say in the Old Testament.