In the Scotsman today, a retired police officer tells us:

‘There’s good news on crime rates but beware the sting in the tail, writes former Deputy Chief Constable Tom Wood. The latest published crime statistics were good news – overall crime down by an impressive 16 per cent since last year and, within that big picture, further good news that violent crime had reduced with only a tiny minority of us ever falling victim. Remarkably, recorded crime has fallen by over 40 per cent in the last ten years. Now there’s an important caveat in all this of course and that’s the fact that only reported crime can be recorded and only recorded crime counts.’

BUT we already have another reliable source dealing with the above concern in The Scottish Crime and Justice Survey (SCJS) which:

The survey, though based on a sample, is very reliable and only those differences that are statistically significant at the 95% significance level are described as differences.

As in the police reported crime statistics, people’s experience of crime is down, massively: 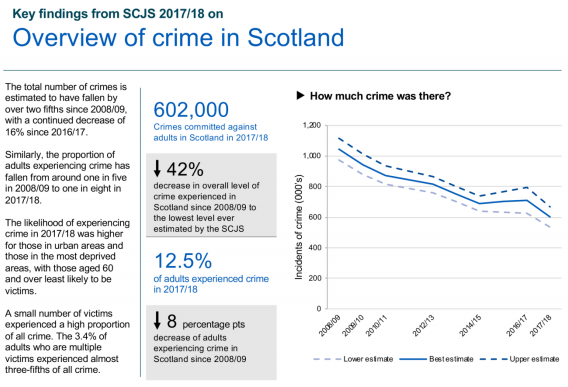 Both violent AND property crime are falling:

Finally, people have experienced an even greater fall in crime than in the police statistics:

2 thoughts on “Despite uninformed Scotsman scare story, Scots reported EXPERIENCE of crime has fallen MORE than the police statistics!”