John McLellan, Conservative councillor from 2017, Director of Communications for the Conservative branch in Scotland, 2012-2013, and adviser to Ruth Davidson, tries to tell us that the Scottish Conservatives are in good health but Labour are not, so if you want to fight against those Indy-obsessed Nats, you know who to support. 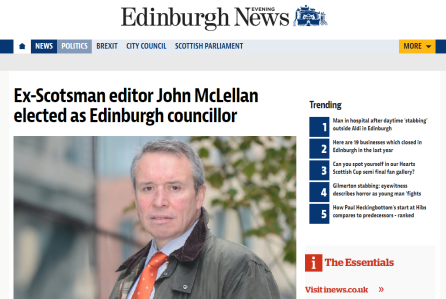 It’s only in the 7th paragraph that McLellan uses the word ‘our’ and many readers realise this is not even attempted impartial journalism. The article is just an extended and deceitful propaganda pamphlet.

‘As Conservatives in England feel the wrath of their supporters over Brexit, the party’s situation in Scotland is different as it prepares to welcome back Ruth Davidson from maternity leave….In many ways, it confirmed what most observers already suspected, that the SNP is holding steady but the slide of Scottish Labour is continuing unabated. Its vote share was down to 15.5 per cent from 22.4 per cent in 2017 despite fielding a very experienced campaigner in Nick Gardner but compare it to a total share for its two candidates in 2012 of 33.2 and the collapse in a traditional Labour seat is undeniable..The Scottish party has remained remarkably united and focused through all the chaos, largely because the SNP cannot accept the independence question has been settled.’

Now McLellan is correct in saying Labour is in trouble but he’s either out of touch or dishonest in his appraisal of the situation for the Scottish Tories. See this Scotland sub-poll for YouGov/Times with 158 adult Scots on 10th – 11th April 2019:

Yes, ahead of Labour in Scotland but remember the UK Tories are considered to be in crisis at 32% and the SNP is ahead of all three of the above, put together. For the EU elections, it’s even worse for them:

It gets even better for ‘us’ with the most recent Westminster Voting Intentions, Scotland sub-poll, from Opinium for 9-12 April:

Here, no different from the UK Conservatives, they have fallen, with a nosebleed, below Labour!

Embedded politicians are not new of course:

Late Edition: Should the Scotsman consider a new title something like this?