‘Doctors are concerned that vaccination rates among adults and children will drop in rural areas because of a change in the way they’re administered under a new GP contract. MMR and flu injections are among those to become the responsibility of teams set up by Scotland’s health authorities. It’s designed to reduce the GP workload, but some argue it won’t work in less populated areas where people might miss visiting teams and have to travel long distances to clinics.’

The evidence? One GP representative (above) tells us it might happen.

The uptake among children for MMR, but not for the five-in-one vaccine which protects against diphtheria, tetanus, pertussis, polio and Haemophilus influenzae type b (Hib), was already lower in some rural areas in under the old contract: 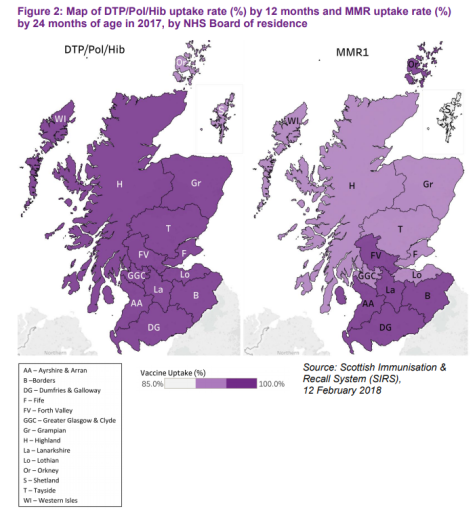 The real variation across Scotland’s population, adult and child, is between the deprived (79% uptake) and the non-deprived (92% uptake) areas.

Would it be unfair to suggest that this is about GPs losing power and income to pharmacists?

So, £9.64 per inoculation, taking about 5 minutes, £60 per hour, to administer by a nurse on just over the living wage? Nice wee earner?

They wanted the reduced workload but to keep the same income?

2 thoughts on “Are some of us protected against Reporting Scotland’s vaccine scare?”