‘A health watchdog has criticised NHS Tayside after breast cancer patients were given lower doses of chemotherapy than patients in other parts of Scotland. Healthcare improvement Scotland say patients should have been informed about the differences in their treatment.’

Based on one whistle-blower and ‘some’ unidentified staff sources.

We do hear that the consultant team made the decision to reduce the dosage because they thought it was in the best interests of their patients and then heard an NHS prof tell us dosage is personalised. Dosage is also a matter of ongoing debate among specialists.

Off course we don’t hear why the lower dose was prescribed for some – an act of kindness by specialists who know what they’re doing? See this:

The Health board reported:

‘The oncologists made a decision based on this review to reduce the dose of chemotherapy with the sole aim of reducing some of the worst side effects. The expert panel has stated that the oncologists took the decision in the best interests of patients.’

Crucially, we don’t hear what percentage of cases received the lower dose.

Then the reporter tells us:

‘The report today pointed to the possibility of a dysfunctional department. ‘Detectives’ spoke of pharmacy and nursing staff who said they had concerns about the change of procedures, but they felt they were not being listened to and that their position was one above.’

Detectives? Really? Inspectors? What is she dreaming of here?

Only Reporting Scotland use the word ‘dysfunctional’. The BBC website and all the papers I looked at (8) did not use the term either. Why?

‘It is yet another blow to people’s confidence in this health board that has been under scrutiny for failings for quite a long time now.’

I’m reminded of a sharp-toothed predator which thinks it has spotted the weakest in the herd and is now going for it.

A search for these failings and causes of patient anxiety finds: 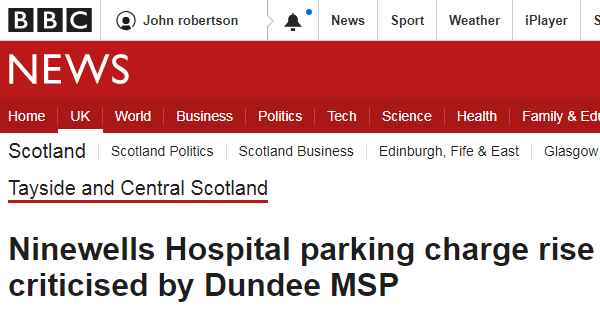 How fast do cancerous cells grow?

Based on one unreliable whistle-blowing patient and probably not affecting breast cancer treatment.

After a series of deeply flawed reports on gangs, calves, obesity, police and fire department performance, pigeons and hospital infections, I think we can now confidently declare that our detectives have found Reporting Scotland to be dysfunctional.

3 thoughts on “Reporting Scotland ‘detectives’ think they’ve found a ‘dysfunctional department.’ They have.”