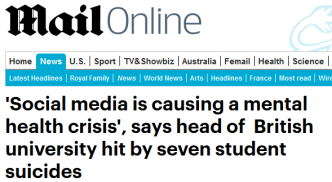 It’s everywhere. Social media is very bad for you and especially bad for your children. Some  of them have even committed suicide because of it, allegedly. Scientists have ‘connected’ it with depression, anxiety and suicidal impulses. They find that those who are heavy users are more likely to be depressed, anxious or suicidal. It’s a correlation of course. We don’t really know whether it’s that the already depressed, anxious and suicidal are particularly drawn to social media because they get something from it, perhaps company, solace, diversion, that they’re not getting in their social world or whether the social media activity made them so or even merely exacerbated an existing condition.

Politicians and journalists hate mere correlations. They want cause and effect and they’re going to get it, even if they have feed us lies about it. There is no convincing evidence that social media engagement is worsening mental health levels in the UK or anywhere else. For all we know, social media may actually be doing us more good than harm, linking the isolated and the lonely, providing mental stimulation to those otherwise deprived of it. Aren’t chronic isolation and boredom really bad for your mental health?

This is a classic ‘moral panic’ where media attention and politicians seeing career opportunities in campaigning against something, amplify its significance and construct a crisis. You can see it happening as I write as newspapers foreground tragic stories of depression or suicide where parents have made some link with the overuse of social media. For a time, each story contributes to a trend where newspapers and broadcasters try to outdo each other with more dramatic, preferably tragic, stories.

We’ve been here before. Remember video nasties? I remember one early eighties, 11-year-old, announcing to the class that his favourite film was ‘I spit on your grave.’ To my knowledge he did not become a serial killer. At the time, there was a full-blown moral panic as social scientists correlated watching violent films with deviant behaviour but could never show cause and effect. Despite this ‘moral guardians’ such as church leaders, educationists and career-minded politicians jumped on the bandwagon appearing at public meetings, in print and on screen, demanding action to stop young people seeing these films. As with all moral panics, it faded out as the media gaze tired of it and began to look elsewhere for new stimulation.

Before video nasties, we had football hooligans, punks, mods and rockers, all an apparent threat to western civilisation and all forgotten because they were mere mediated social constructs with no lasting substance. After the video nasties, we had heavy metal-based satanism, goths, raves and ecstasy pills. It was only when a prominent health professor reminded us that horse riding was statistically far more risky than taking ecstasy pills, that it too faded from our screens and frontpages.

Even before that we had horror and crime comics threatening the safety of families in 1950s USA and way back in the 1700s, the ‘fops’ forewarned the terminal decline of Georgian England.

While I don’t doubt that some aspects of heavy social media use may be bad for your health, so are many other things such as inactivity, poor diet, poverty and, notably underlying inequality. There’s real evidence for the latter and we could actually do something about that.

More unequal societies such as the USA, Russia, India and increasingly the UK, suffer greater problems of mental health, crime, illness, short life expectancy and poor educational attainment than more equal ones such as Denmark, Germany, France or Japan.

For a review of the book see:

Just as I was about to post the above, a related piece, also in the Guardian, popped up. It too questions the centrality of social media use and reminds us that analysis of the ‘real world’ is probably more useful in understanding why so many seem to be depressed, anxious or even suicidal. Here’s an extract:

Blaming social media for child angst? It’s only half the picture

But the debate about social media and teenage mental health is getting uncomfortably reminiscent of the age-old argument about whether women’s magazines full of skinny models were making young girls anorexic, to which the answer is that basing an industry on half-starved young women is wrong on every level but eating disorders are infinitely more complicated than that.

Glossy magazines were only the most visible expression of a commercial culture based on making women think there’s something wrong with them. But even blaming eating disorders on that broader culture sidelines the issue of other things that may be going on in individual girls’ lives, or how both those factors might interact with any organic cause of mental illness. Girls who are completely happy with their bodies and lives don’t generally develop eating disorders overnight just by reading fashion spreads. Understanding this doesn’t remotely absolve fashion magazines from recognising their social responsibilities, both to readers and to models, and the changes some have made are also sensible. But they only get us so far.

Research does suggest that children who spend a lot of time online are unhappier than children who don’t, but it’s still unclear which way round the cause and effect are. Are social media so toxic that they drag otherwise happy children down, or do the lonely and troubled spend longer than others seeking comfort from them? Or is the truth somewhere in the middle, with unhappy kids more likely to chase a kind of gratification that will ultimately leave them feeling worse, like adults seeking solace in a bottle? If it’s the latter, then obviously social media companies would still have a moral obligation to vulnerable users. But that would be only half the picture. The other half is asking why so many kids are vulnerable in the first place.

18 thoughts on “It’s not so much social media that are making us unhappy, it’s more, inequality”