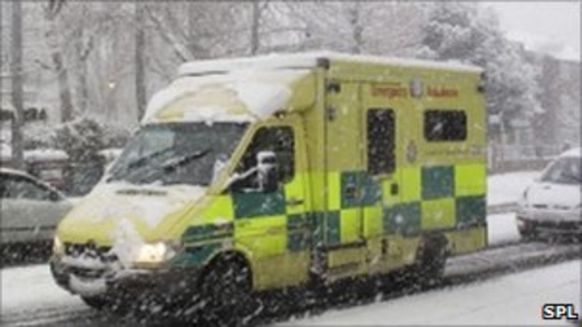 A report in the usually trustworthy, often Blairite, Guardian, on Saturday 26th January 2019, has been described by former TV health correspondent, Elaine Betfred, as ‘classic propaganda.’

Betfred points out that the report seems to be largely based on the opinion of ‘one Welsh coroner’ and is devoid of reliable statistics upon which to base their, ‘frankly hyperbolic headline.’ The Guardian reported:

Ambulance and A&E delays are putting patients ‘at risk’

Patients’ lives are being put in danger by long delays for vital NHS care, a coroner has warned, following the death of a 93-year-old woman who waited 10 hours for an ambulance and another two to get into A&E. Ambulance hold-ups, staff shortages and the difficulty of getting speedy A&E care have contributed to “numerous” deaths and may claim more lives, according to John Gittins. He outlined his fears in a formal legal warning detailing a number of recurring flaws in care that he sent to the NHS after investigating the death of Gladys Williams. She fell and broke her spine in Wrexham in Wales last April, but it took 12 hours and six minutes after the first 999 call was made before A&E staff began treatment.

‘Using a single extreme example is neither useful nor is it tasteful. The Guardian reporter is clearly hostile, even if they have repressed the emotion, toward the Welsh Labour Government.’

Betfred was reportedly ‘disgusted’ by the report’s account of the 86-year-old dementia patient who broke her leg at her care home in Swansea on Sunday 27th but an ambulance did not arrive until 5.30pm on Tuesday. The patient’s relative said:

‘My mother was screaming in pain. I am fuming about the wait she had to endure, although that is not at all directed at the paramedics or hospital staff or staff at the care home.’

Betfred describes this as:

‘A form of morbid titillation for readers which does not meet the Guardian’s own editorial guidance on informing them.’

However, readers in Scotland may not be able to relax. On January 4th 2019, BBC Scotland was able to report ‘exclusively’:

Concern over ambulance response times in rural areas. Scottish Ambulance Service figures show the average time taken to attend a 999 call in Turriff between January and October last year was 18 minutes. The national target time is eight minutes. North East Scotland MSP Peter Chapman said more needed to be done. The Scottish Ambulance Service said the most serious calls were prioritised. The average time was 15 minutes in Aboyne and the Mearns. However, the average for Grampian was under seven minutes. Chapman said: “These figures highlight once again the poor level of cover experienced by parts of the north east.”

Bedford is thought to have advised on the above report and is satisfied that it makes use of numbers. However, TuS Health Correspondent, Dr JW Robertson, is less happy:

‘What is the point in extracting and reporting the figures for the only (?) two small towns where they diverge noticeably from the average? Must all patients, regardless of the severity of their condition and distance or type of road access from the nearest hospital, be guaranteed the same response time? Perhaps if NHS Grampian had thought to buy, and then modify, the decommissioned Harrier Jump Jets a few years back?’

Aberdeen to Turiff in 38 seconds! Landing space clearance, air to ground missiles on board.

Finally, readers of TuS will not be surprised to hear that Chapman is a Tory MSP and that BBC Scotland were not able to find any statistics for response times in England where his party is ‘in government’, if we can call it that.

Late News: Despite genetic evidence, secretly ‘gathered’ by a TuS staffer known only as ‘Monica’, Scottish Labour have denied that they are related to Welsh Labour.

Footnote: Dr Robertson is not a medical doctor but can recommend a good book on Critical Theory which is most effective for insomnia.