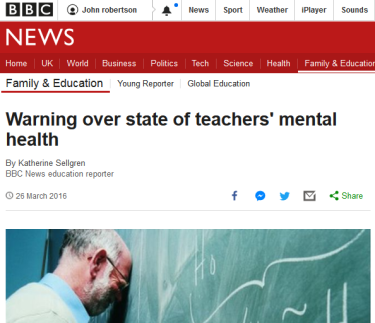 Much is currently being made by our NoMedia, fed by Labour and the Lib Dems, of 400 000 workdays lost due to mental health conditions, over three years. Missing, amongst other indicators of quality journalism, has been context – is there anything special about this apparent level of mental health problems at work? Surely, we’d need to know that if we and policy-makers, in particular, are to react appropriately to the ‘news?’

The Mental Health Foundation does not identify any particular occupation as being at increased risk but rather finds that other factors, which can be found across all professions, are more likely to lead to the onset of a mental health problem:

However, when we do look at the relative prevalence of ‘common’ mental disorders in occupational groups we do not find teachers to be significantly more at risk. From a large (5 497 subjects), UK, peer-reviewed, survey in 2009, see this:

On the basis of the above, teaching professionals have only a slightly higher (15%) prevalence than the average (13%) but this is lower than for several others. Notably, the study also found lack of job security, to be a major factor, regardless of occupational role. This is of course not a common risk factor among teachers, in comparison to many other occupations.

Footnote: The absence of separate figures for women teaching professionals and the fact that men had only an average prevalence (13%) probably suggests that the prevalence among women teachers could be higher at around 17%. However, this remains only at the average for women generally.

3 thoughts on “Are Scottish teachers more stressed and depressed than the rest?”