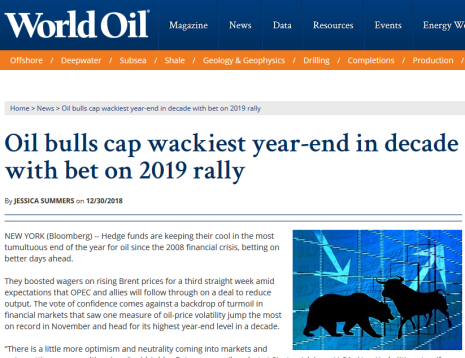 Like many of you, I’d much prefer a low-carbon future for Scotland but, until the great day, I think we need the strength of our oil and gas sector as part of the toolbox in the campaign for independence. If prices fall, we can be sure that those such as the state broadcaster’s Douglas Fraser, will weaponise them in his threadbare propagandising for Reporting Scotland.

Also, like many of you, I think, I’m not a big admirer of hedge fund managers, think Theresa May’s hubby, but when it comes to oil price ‘futures’, they’re the equivalent of bookies.

So, in World Oil today:

‘NEW YORK (Bloomberg) — Hedge funds are keeping their cool in the most tumultuous end of the year for oil since the 2008 financial crisis, betting on better days ahead. They boosted wagers on rising Brent prices for a third straight week amid expectations that OPEC and allies will follow through on a deal to reduce output. The vote of confidence comes against a backdrop of turmoil in financial markets that saw one measure of oil-price volatility jump the most on record in November and head for its highest year-end level in a decade. Analysts surveyed by Bloomberg forecast Brent to average $70/bbl in 2019 as the market tightens, OPEC’s supply cuts take effect and unintended losses in Venezuela and Iran increase.’

That’s quite a tame estimate given the several predicting up to $100pb. See:

As Scottish oil heads for $100pb will the UK Treasury tax this massive revenue?

A fifth prediction of oil rising to $100 per barrel for Scottish oil, suggests pre-tax revenue of around $1 trillion!