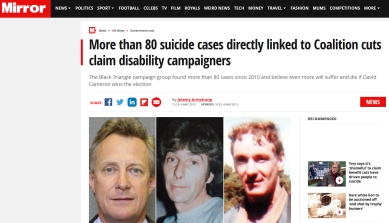 ‘The experience of the United Kingdom, especially since 2010, underscores the conclusion that poverty is a political choice. Austerity could easily have spared the poor, if the political will had existed to do so. Resources were available to the Treasury at the last budget that could have transformed the situation of millions of people living in poverty, but the political choice was made to fund tax cuts for the wealthy instead.’

The report ‘Statement on Visit to the United Kingdom’, by Professor Philip Alston, United Nations Special Rapporteur on extreme poverty and human rights, was published yesterday (16th). Esther McVey, the DWP Secretary of State responsible for delivering Universal Credit, resigned apparently, but conveniently, over Brexit. As the above quote suggests the report is a withering condemnation of Tory austerity policies.

The report, however, draws attention to the efforts of the SNP administration in Scotland to moderate where it can the worst of the austerity imposed. Briefly, before describing that, a few words on McVey, responsible for much of the recent suffering and child of Thatcherism.

McVey is a schoolfriend of Kate McCann and was on the board of Madeleine’s Fund before leaving for unexplained reasons. She may still be on the Samaritan’s board! Allegedly, she has been on the board of Loyal Scots, a fundraising company registered in Denmark. You can guess their purpose from the name. DWP, DUP? Finally, she claimed that the DWP policy known as the ‘rape clause’ (Is it a DUP policy too?), which forces women who have been raped to provide details of their experience in order to claim benefits for a third child, was providing therapy for rape victims by offering them “an opportunity to talk”.

Here are the extracts from the report referring to Scotland: