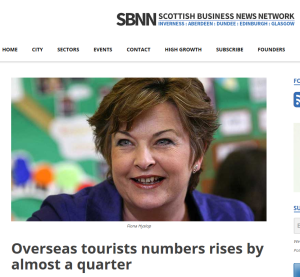 ‘The number of overseas tourists visiting Scotland rose by almost a quarter in the 12 months to the end of March 2018, compared to the same period in 2016/17. Figures released by the Office of National Statistics (ONS) statistics for Q2 2017 – Q1 2018 showed 3.4 million overseas tourists visited Scotland, spending £2.4 billion, an increase of 29% compared to the previous 12 months. The number of UK visitors to Scotland rose by 11% to 12 million while expenditure increased by £401 million to £3.1 billion. Around 29% more European tourists visited Scotland during the period, with 2.1 million visits recorded. Across the UK as a whole the number of visits from European tourists fell by 2% and expenditure fell by 1% in the 12 months to the end of March 2018.’

These figures come after numerous earlier reports of a boom in tourist visits to Scotland:

Tourism spending in Scotland surges ahead of UK figure