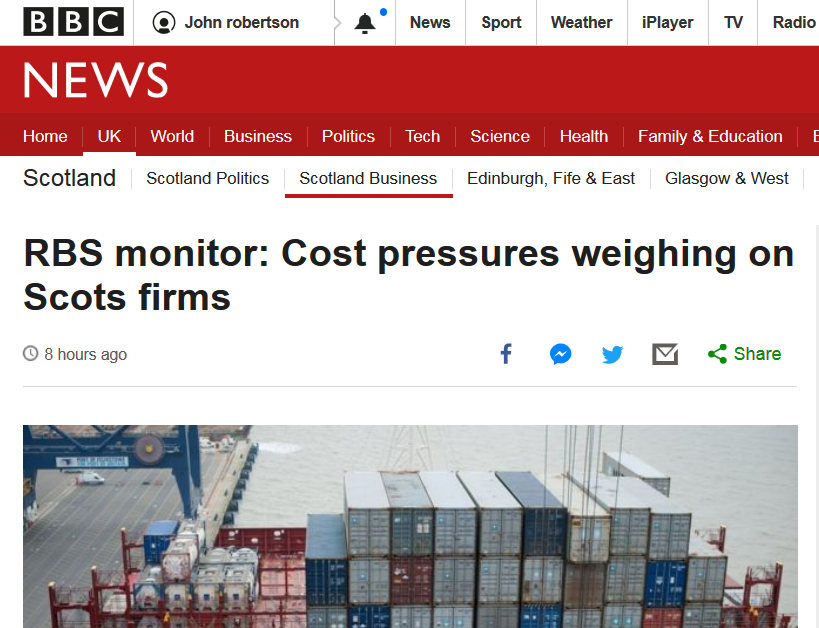 Deeper in the text are the headlines we could have had:

‘Most Scottish firms in particular report growth and confidence in future’

Here’s what we got in the BBC report after the negative headline:

BUT ‘Cost pressures on Scottish firms have risen to their highest level for seven years, according to a report.

BUT The latest Royal Bank of Scotland business monitor found inflationary pressures were having “a significant impact” on their activities.

BUT Nearly two-thirds of all firms reported higher costs during the second quarter.

So, four statements in and many readers have gone, sighing into their cornflakes, before we see:

HOWEVER, the majority of more than 400 companies surveyed said they had experienced increased activity over the last three months.

HOWEVER, Firms said they expected the trend to continue for the rest of the year.

BUT Cost pressures were felt slightly more strongly in services (+63%) than in production industries (+50%), while tourism (+82%) and distribution (+70%) reported the highest pressures.

HOWEVER, The survey indicated that Scottish exporters in particular saw a strong pick-up in business this year.

HOWEVER, It suggested weakening sterling and global growth acceleration had helped fuel the country’s economy during the first six months.

HOWEVER, The survey, conducted by the Fraser of Allander Institute, found that 23% of firms enjoyed an increase in export activity in the three months to June,

BUT, compared with 16% reporting a decline.

HOWEVER, The production sector led the way during the second quarter, with a net 11% reporting an increase in exports.

HOWEVER, Businesses were optimistic that the trend would continue, with a net 11% expecting exports to rise over the next six months.

HOWEVER, More than a third (35%) of firms reported an increase in the total volume of business during the last quarter, compared with 29% who witnessed a fall in activity.

HOWEVER, The balance of +7% represents a rise of six points on the first quarter.

HOWEVER, Growth was strongest in transport and communication, with a quarter (24%) reporting an increase. Manufacturing and finance and business services both enjoyed a net increase of 14%.

BUT, Tourism fell flat in the quarter, but a net third of companies said they were expecting growth during the remainder of 2018.

BUT, Southern Scotland was weakest, with a net 6% of those surveyed reporting that new business volume had grown.

The BUTs have it!?

I know, it’s balance! That’s what real journalists do. But, headlining the negative take, opening with four more negative statements and finishing but-heavy – does that imbalance it?

That’s just our editorial judgement in deciding what the main points are. And, it reads better that way. And, we respect our readers intelligence and commitment to read the whole thing. See!!! Don’t criticise us, you ffffffffffffff wwwwwwwwwwwww bbbbbbbbbbb!!!!!!!!!!!!!!!!! We’re the BBC!!!!!!!