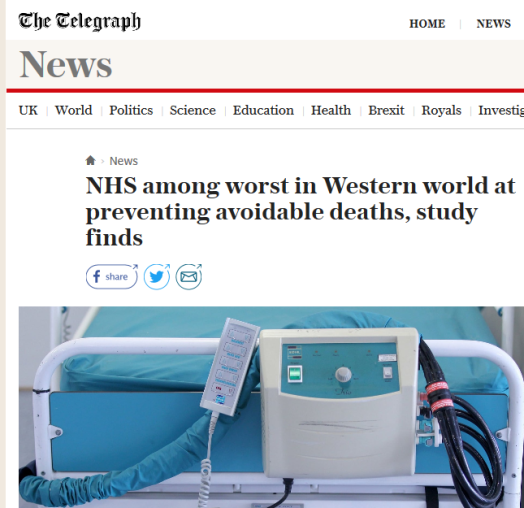 There is a media frenzy this morning on the supposed failure of the NHS. The research itself, led by the Nuffield Foundation, has serious limitations in its ability to say anything meaningful about the performance of NHS Scotland although it claims to do so.

In the introduction, we read:

‘While there are important differences between the health services in Scotland, England, Wales and Northern Ireland, in an international context they are quite similar.’

The report never returns to those important differences but earlier Nuffield reports were clear on them and their significance. Here’s a short extract from 2017:

‘Scotland has a unique system of improving the quality of health care. It focuses on engaging the altruistic professional motivations of frontline staff to do better and building their skills to improve. Success is defined based on specific measurements of safety and effectiveness that make sense to clinicians.’

Looking at the report’s 126 sources, only one specifically mentions Scotland in its title, most are based on NHS England and those, such as the OECD or Commonwealth Foundation reports have no breakdown to allow identification of Scottish results.

One example of the report’s failures in this respect can be seen in statements like this:

‘The UK has markedly fewer doctors and nurses than similar countries, relative to the size of its population, and fewer CT scanners and MRI machines.’

This is not accurate. First on nurses, Scotland with only 10% of England’s population has 19% of the number of nurses or nearly twice as many per head of population. Second, on GPs, the ratio of GPs to overall population is: England 1 GP for every 1262 people Scotland 1 GP for every 999 people. See this for more and for sources:

‘Its main weakness is health care outcomes. The UK appears to perform less well than

could have saved their lives’

Scotland’s health outcomes are undeniably worrying but the report fails to mention areas where NHS Scotland seems to be getting results and suggesting a clear trend toward improvement, not apparent in rUK. Two clear examples are:

Standardised mortality rate in Scotland’s hospitals falls by nearly 10% in just three years despite crude mortality levels being static and as ‘20,000 ‘additional deaths’ have occurred in England and Wales in the first 16 weeks of this year.’

To keep this short, I won’t elaborate here but you can see more by clicking on the links above.

Nuffield are themselves quite clear on this:

‘There are several important limits to what we can know. Quality of care is difficult to

measure in the first place, and the data produced by different health systems often cannot

be fairly compared between them. The way information is defined and collected often

changes, making comparisons over time especially hazardous.  Meanwhile, people’s health is affected by the society, economy and culture they live in more widely – not just by health care systems. Indeed, in the UK many important tasks that relate to health, like reducing obesity, are actually given to other bodies like councils rather than the NHS itself. This means, as we will see, that we often cannot be sure whether the differences we see are due specifically to health care. Lastly, comparing how health systems perform does not tell us the reason for these differences or whether they could be justified. Some countries will have taken an intentional choice to prioritise certain areas over others. This, coupled with the lack of data, makes producing an objective overall ranking or score impossible.

Only a year ago, Nuffield reported specifically on NHS Scotland. Their assessment was positively glowing.

‘Scotland has a unique system of improving the quality of health care. It

focuses on engaging the altruistic professional motivations of frontline staff

to do better, and building their skills to improve. Success is defined based

on specific measurements of safety and effectiveness that make sense

formal approach than in England. The Scottish NHS has also benefited

from a continuous focus on quality improvement over many years. It uses

a consistent, coherent method where better ways of working are tested on

a small scale, quickly changed, and then rolled out. Unlike in the rest of the

UK, this is overseen by a single organisation that both monitors the quality

of care and also helps staff to improve it.

remote areas. There are pioneering initiatives to address these, like the

people in very deprived areas, and use of video links for outpatient care on

remote islands. These should be considered in other parts of the UK facing

There is much for the other countries of the UK to learn from this. While

comparing performance is very difficult, Scotland has had particular

success in some priority areas like reducing the numbers of stillbirths.

with a tendency towards too many short-term, top-down initiatives that

often fail to reach the front line. It also provides one possible model for

improvement, and a Welsh system described as needing better ways to

hold health boards to account while supporting them in improving care.

the health and social care system work together. It has used legislation

to get these efforts underway while recognising that ultimately local

relationships are the deciding factor. There is much for England and Wales