A few years ago, Frankie Boyle suggested that Scotland should become an Islamic Republic but that it would mean we’d have to treat our women better. I know, it was a joke but it played to a negative stereotype of the Scots which is increasingly under attack by facts on the ground.

Stereotypes take a long time to change. Comedians and, sometimes, TV drama writers, continue to characterise Scots as violent, drunken and mean. Similarly, the Welsh, are regularly portrayed in negative ways. In sharp contrast, ethnic and religious minorities are treated with care and, after some time, the Irish are rarely stereotyped in the ways they were in earlier times. Is it because we, the Scots and the Welsh, is not independent?

Reports that domestic abuse in Scotland have dropped from those of 2016 by 6.1% may suggest another example. The figures are still horrible though. Between December 10th 2017 and January 7th 2018, there were 4 799 reported incidents, down from 5 111 over the same period the previous year.

Not only are reports of domestic violence falling in Scotland but they are falling well below those of England. See this diagram from the Joseph Rowntree Foundation in 2017: 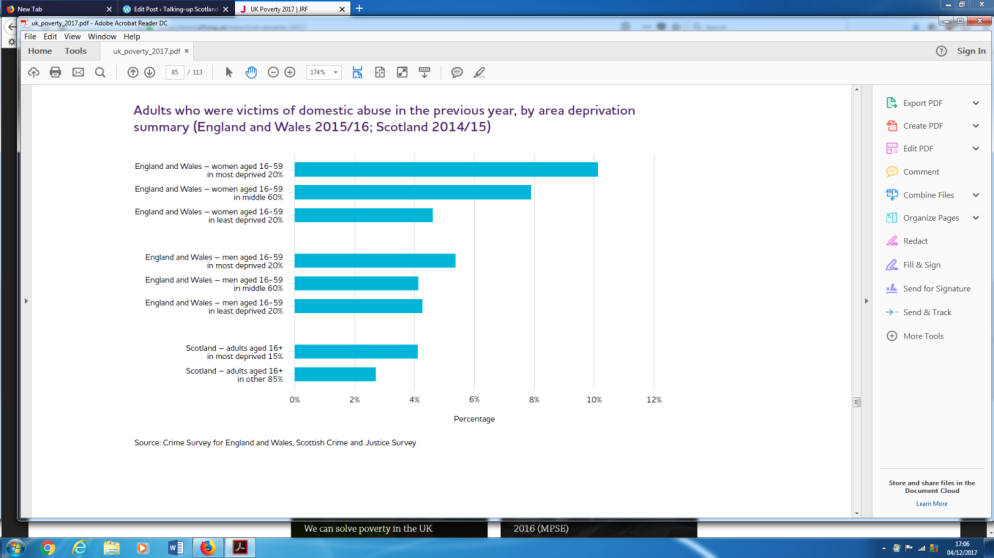 From: ‘UK Poverty 2017 A comprehensive analysis of poverty trends and figures’ Report by the JRF Analysis Unit

Domestic violence is, for all age and deprivation-level groups, lower in Scotland than in England. It would be really interesting to have a precise gender breakdown for the Scottish figures to compare with the shocking level in one of the groups above – 10%!

I’ve already reported on other changes which challenge the negative Scottish stereotype. See these:

Scotsman headline is untrue: hate offences against Jews in Scotland are extremely rare by contrast with the rest of the UK?

Scotland’s homicide rate falls by 47%, is lower than the rate for England and Wales and has fallen faster than many other countries in the ten years of SNP government

Extracting the positives for Scottish Government from the Joseph Rowntree Foundation report on Poverty which you are unlikely to hear of elsewhere: Lower poverty, better qualified workers, lower domestic violence, smaller educational gaps and eating just as much fruit!

Footnote: I’ll do a separate report on how safe Scottish university cities are by contrast with those elsewhere in the UK. It’s shocking.

6 thoughts on “Reported domestic violence in Scotland falls. Is this part of wider change?”