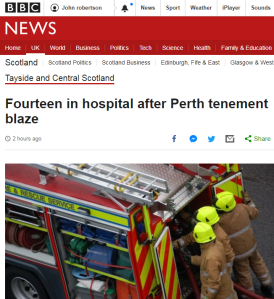 They were called out at 02:38 but there’s no mention of the response time in the MSM reports so I feel sure there were no complaints about it and thus no opportunity to revisit their earlier scare stories about staff shortages. A local resident told TuS that they were there ‘quicker than you could tell Ruth Davidson was lying, like, ken!’

Using Reporting Scotland editorial guidelines, TuS is no able to re-use our earlier report to harp on about the Scottish Fire Service’s good figures:

‘Staff Headcount On 31st March 2018 Scottish Fire and Rescue Service (SFRS) had a total headcount of 7,776 staff, which is down 0.7% on the total last year. The 3,546 wholetime operational staff (full-time firefighters) make up the largest staff group at 46% of the workforce. This was a reduction of 2.7% on last year’s headcount for wholetime operational staff. Retained Duty System staff make up the next largest group accounting for 37% of staff with a headcount of 2,863. This is relatively unchanged on last year. The largest proportional change is in the control staff group which increased by 24 (14.5%) in the last year, bringing the total up to 189.’

Scotland has 6 409 firefighters while England has 35 620. So, England has 10 times the population but only 5.5 times the number of firefighters. Before the Tory cuts, the ratio would have been 7 times as opposed to 10 times. Bearing in mind Scotland’s larger area per head of population, that might not seem unreasonable.

And, deaths in fires are falling:

‘Fire safety checks across England have fallen by 42% over the last seven years, according to the new watchdog for fire and rescue services. HM Inspectorate of Constabulary, Fire and Rescue Services says brigades do a good job in emergencies, but amid cuts have reduced “vital” prevention work. The watchdog said the number of audits carried out by firefighters dropped from 84,575 in 2010-11 to 49,423 in 2017-18.’

In Scotland, published in August 2018: