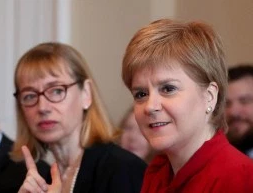 ‘The idea of Scottish independence is RADICAL.’

As Theresa May, dark mistress of the Windrush and Hostile Environments abuse, wife of an investor in the weapons killing thousands in Yemen and leader of the brutal Tory campaigns against the poor and the disabled, briefly sobbed for herself, the Scottish First Minister felt something for her and said so. Leadership is tough she empathised. Perhaps female leadership is even tougher she thought. It whooshed me as they say.

In 2016, she had angrily denounced the Trump and enthused about the inspirational qualities of ‘sister’ Hilary Clinton, for young women leaders, despite the evidence of her general monstrosity and hawkish foreign policy, so horribly clear when we saw her watch the murderous buggery of Gaddafi and gloat – ‘We came, we saw, he died!’

Less dramatically, she sided with and protected her top civil servant, another ‘sister’ of course, despite their combined, unprofessional, incompetent and perhaps criminal part, in the destruction of the man who had nurtured her career and made her leadership possible. Remember she was not elected leader. She likes to reflect publicly on leadership too much for my liking.

Only weeks ago, we saw another senior SNP figure show signs of detachment from what should be his prime purpose:

The over-familiarity with professionals, civil servants, may well have played a part in these examples of formerly radical politicians getting too cosy with the system. This is not a new idea:

‘Insurgents and renegades have a role, which is to jolt the system with new energy and ideas; but professionals also have a role, which is to safely absorb the energy that insurgents unleash. Think of them as analogous to antibodies and white blood cells, establishing and patrolling the barriers between the body politic and would-be hijackers on the outside. As with biology, so with politics: When the immune system works, it is largely invisible. Only when it breaks down do we become aware of its importance.’

While you may have little time for them generally, some Brexiteer thinkers have noted the same phenomenon in MEPs and have applied it to SNP MEPs:

‘Such arguments of course are rejected by the corporate managerialists of the Scottish Government and its advisers from academe. They live in a Keynesian world where the state is the economy, and where good people doing good things with taxpayers’ money produce good results; with the proviso that they are the good people – earning fine sums from the public purse and developing statist strategies in cahoots with the civil servants who administer those.’

Even the formerly fiercely radical Sinn Fein have been associated with this tendency to lose edge:

‘The main reason for the new shift is that Sinn Fein wants to get into government – even if that means being a minority partner with either Fianna Fail or Fine Gael. This, however, would be a disastrous move as the experience of the Labour Party has demonstrated. Once a party adopts this stance, its election commitments must be looked on with some scepticism as it will claim – like Labour – that in government it had to compromise. Fianna Fail and Fine Gael want to develop a tax haven model of Irish capitalism. Any radical party which joins them it will be forced to embrace that project and with it comes deepening inequality and a run-down of public services.’

Are these two the only ones showing signs of decay?

8 thoughts on “Is the SNP leadership in danger of comfortable absorption and losing edge?”