What idiot wrote this report? It makes no bloody sense at all! I don’t know if I can go on.

‘With more than 160 organised crime gangs in Scotland, [UK] law enforcement agencies warn the threat is staggering and call for more money to stop the criminals.’

It’s a cracker of a sentence where the two parts mean little together. The first part is about Scotland, yet the second part of the same sentence is based on only loosely connected developments in England. It turns out that the number of gangs in Scotland is falling, that only 160 or maybe 117, out of 4 500 (3.5% or less), are in Scotland, that they are rarely using firearms and that the above agency is a UK agency anxious about ‘staggering’ increases in gang activity in England. 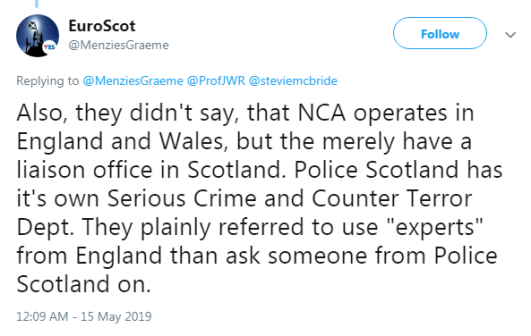 If you’re still there for the main report, you hear, a bit surprisingly:

‘Police say the number of organised crime groups in Scotland is falling.’

What, really? Why is that not the news then? How much? We never hear.

Then, after a reminder of the Lyons and the Daniel’s car chase case, we’re off into an extended report about the UK National Crime Agency’s estimate that there are 181 000 members of organised crime groups ‘throughout the country.’

Right, let’s just ignore the confusion about how many members there are. 4 500 gangs in the UK but only 160 in Scotland – 8% of the population but only 3.5% of the gangs? I blame the SNP!

We don’t hear how many members there are in Scotland but then Reevel Alderson tells us that there are 117 OCGs in Scotland. What eh? It was 160, just a minute ago.  What’s an OCG? Didn’t you watch Line of Duty? Organised crime groups! And, ‘Feuds between five of them pose a heightened risk of harm.’ Just 5? Just ‘between them?’ During the car chase film didn’t you say that they posed a risk to the members of the public? Yes, but….

Then, we hear that the NCA needs an extra £2.7 billion to match the criminals. So, are the gangs increasing in England? How much? No mention.

Then we get a lady, in England, telling us that it’s also about paedophilia and fraud before Reevel tells us in the story of a cocaine gang with a massive arsenal smashed by the police. Where? Must be England I suppose. But, but, then we get a senior police guy linking it to an unsubstantiated threat in Scotland.

I’m confused. Reevel’s heid must be bursting. Wasn’t it just one car chase and an assault on one criminal by others using machetes, in Glasgow? There were no civilians hurt. Do we, in ‘this country’ (Scotland) really need millions invested in automatic weapons when there are fewer gangs and they’re just using machetes, on each other?

Reporting Scotland sets a new standard. Like an earlier report on gangs, they just have to try to persuade Scots that things are just as bad here. See:

BBC News tries to spread knife crime crisis into Scotland to tell us: ‘You’re no different. Don’t get any ideas!’