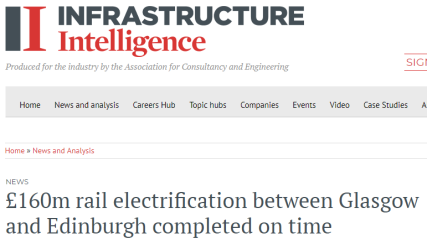 From Infrastructure Intelligence, on 5th April 2019 and reported by ….?

‘Work on the fifth electrified route between Scotland’s largest cities has been celebrated after being completed on time and on budget. Not only will it mean a reduction in noise and better air quality for those who live and work near the railway, the upgraded line will allow for the introduction of modern, electric trains from May and more seats on services between Glasgow Central and Edinburgh. Funded by the Scottish Government, the investment was made to add resilience and capacity into the network to cater for projected growth in passenger numbers from towns such as Livingston and West Calder into Edinburgh in the east and from Cleland and Shotts into Glasgow in the west.’