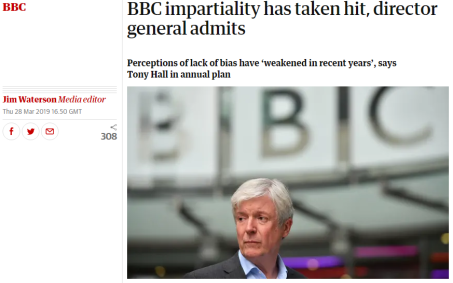 In his piece in the Guardian on 28th March 2019, BBC Director General, Tony Hall, made no reference to Scotland. Given his awareness of the heated debate on BBC bias against independence in Scotland, during and since the referendum, this is interesting.

Driven by accusations of impartiality in reporting of Brexit and, in particular, imbalance in the level of exposure offered to ‘charismatic’ Leave figures such as Farage, Rees-Mogg and Johnson, Hall clearly felt the need to respond. Here’s an extract:

‘The BBC’s director general has admitted that the corporation’s reputation as a provider of impartial news has taken a hit in recent years, while insisting the corporation is committed to giving coverage to all sides of controversial debates…The impartiality of the corporation’s news output has come under attack from all sides in recent years, especially following the Brexit referendum. It has been at the focus of discussions over whether the national broadcaster should be giving airtime to individuals who represent extreme views in the name of balance.’

Does ‘all sides’ include us?

It’s not quite an apology but it is a first step toward the critics, recognising the legitimacy of their opinion. By contrast, in Scotland, we’ve only had indignation and denial.

After a wee dash of sociology and a dog walk for reflection, I see why. Apologies if you were there before me. The Brexit debate is between elites while the IndyRef debate was between elite groups and a predominantly mass movement. There is no need felt by any elite group to apologise to any mass movement they have defeated by deception. In both cases, working-class people were co-opted (fooled?), on the EU Leave side by exploitation of their understandable fear of mass immigration and on the Scottish Independence No side, by their understandable fear of economic uncertainty.

Private Schoolboys on Both Sides of Brexit

Both sides in the Brexit debate and the BBC are led by predominantly privately-educated, Oxbridge elites who continue to meet at high-level political events, on corporate boards, at sporting events, at receptions and on holiday. They are constantly exposed to peer-pressure in these places and this must be resolved to enable them to survive. For the BBC elite, however, they are under extra pressure, from both sides, and so must try to reduce the level of hostility by some kind of admission of guilt which will enable them to retain their presence in these elite places. They did the same in 2003 under peer-pressure from Labour Party leaders to admit they had not reported the run-up to the Iraq invasion fairly even though, as later research proved, they had been essentially supportive of Blair’s campaign.

No conspiracy is required for this to happen. The members of these elites act without the need for much reflection, always in their own self-interests (survival, advancement) which are also the interests of their elite group as a whole.

Evidence of the social characteristics of these interlocking elite groups was exposed, in 2016, when the BBC’s own Sutton Trust found:

‘Three-quarters (74%) of the UK’s top judges went to a fee-paying school, and nearly eight in 10 (78%) went on to Oxford or Cambridge University. Among top military personnel, some seven in 10 (71%) were educated in the private sector, although just 14% were Oxbridge educated. Slightly more than half of leading print journalists and solicitors (51% each) attended fee-paying schools. Just over half (54%) of these journalists attended Oxford or Cambridge, along with 55% of solicitors and 51% of the senior civil servants included in the study. In politics, half the Cabinet were privately educated (including old Etonian Prime Minister David Cameron) compared with 13% of the shadow cabinet, and around a third (32%) of MPs.’

In Scotland, the elite groups are slightly different but equally influential. As in the UK, there are the same pro-Union groups within the Conservative Party, business, the military, Rugby Union (Union!) and in the Arts. A key difference lies in the role of senior Labour party members, mostly excluded from elite membership in England, but allowed day-to-day management of Scottish institutions as long as they remain loyal to the Union. Dominant in Scotland for 50 years, the Labour Party has had a powerful presence in BBC Scotland. 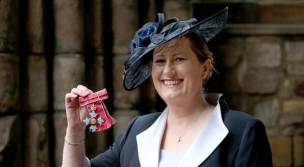 Head of News in 2014, John Boothman, lost a grievance case against a daughter of the late SNP politician, Margo MacDonald, after she had recorded him being abusive about her and her mother. Boothman’s marriage to a Labour politician, Susan Deacon, also cast doubt on his impartiality.

More serious accusations of Boothman ‘acting at the behest of Labour’ had been made in 2013:

More recently, Sarah Smith, daughter of the late Labour leader, John Smith, was anointed BBC Scotland Editor, in 2017, before going on to make a major blunder in the reporting of A&E figures with the effect of seriously misrepresenting the performance of NHS Scotland.

Together, these traditional elite groups, with the Labour party and the media as their functionaries, were able to co-opt working-class groups distinctively loyal to the Union and together mount a fear-based campaign which in the end, triumphed.

The Yes movement, though by no means homogenous or especially working-class in terms of its leadership, was essentially a leftist mass movement with no notable elite membership or funding and relying almost entirely on social media activists for its communications.

10 thoughts on “Why will BBC UK move toward admitting ‘impartiality’ while BBC Scotland won’t? Peer-pressure!”