Of course, NHS England has been told not to bother with these statistics. It’s now almost exactly a year since we read this astounding comment:

The Health Service Journal has reported that Health Secretary Jeremy Hunt has scrapped the measurement of NHS Accident and Emergency (A&E) departments until April 2019 – amid the biggest NHS winter crisis in years.

Yes, that’s 2019 – the next time we know how our A&Es are performing, we will no longer be in the European Union, assuming it’s not deferred even further then. That’s how badly and how long the Tories want to hide the A&E crisis they’ve allowed to happen – or inflicted, according to NHS campaigners.

And no wonder, since the increases in A&E waiting times reflect the collapse in NHS performance that began almost the moment that the Tories entered Downing Street: 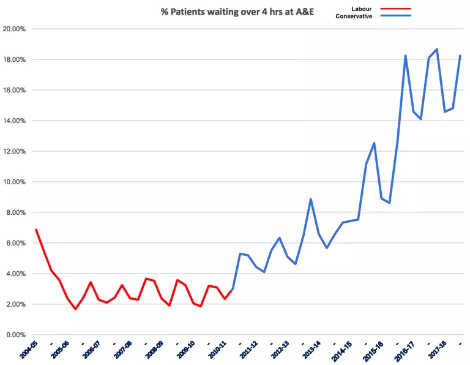 Remember those days when Labour were better than the Tories? Wales?