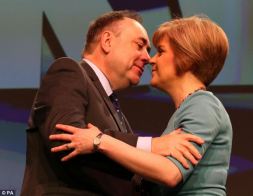 I’ve been a ‘stout’ proponent of the primacy of party unity in the face of our common enemies but there has to be a limit to my tolerance of immorality, and I’ve reached it.

It pains me to write this.

It’s an impressive but deeply disturbing work in which, not only are the First Minister’s aides exposed as dishonest and frankly evil in their intentions but, I’m afraid to say, Nicola Sturgeon seems to have been more than a bystander in these disgraceful machinations against the former First Minister, Alex Salmond.

Here are some of the key arguments:

The last-mentioned feminism brings me to a concern I’ve held for some time, that the FM’s world view with particular regard to foreign policy and the role of the US in it, is ‘Atlanticist’, as in the views of Gordon Brown and most Blairites. Worse still, it is hawkish as in those who support Hilary Clinton.

During the last US presidential election campaign, the FM, came out in explicit support of Clinton. I was horrified. Clinton is an evil, self-serving, utterly corrupt hawk whose actions, had she won, would have resulted in even greater carnage in the Middle East as she led US intervention against her personal foe, Putin. The monstrous Trump’s isolationism, even limited by the US establishment as it has been, may well have saved the lives of thousands of women.

I wrote this, at the time, to the FM only to be fobbed of by one of her aides:

Letter to First Minister Sturgeon re her support for Hillary Clinton

I did my best to forget this as I walked the streets carrying ‘I’m with Nicola’ stuff to push through letterboxes. Then she did it again, tweeting enthusiastically that we should all have a look at the new book by Henry Kissinger! Henry Kissinger? A man of such monstrous horrors including the illegal bombing of and mass deaths in Cambodia? See this for more detail.

Once more, I suppressed it and returned to focus on the greater cause but, for a reason now clear to me, Salmondgate, the puss-filled wound has re-opened. The FM is prepared to support any feminist position utterly regardless of even the most nauseating considerations. She could have said nothing about the US presidential elections, and she need not have reviewed the Kissinger book, but she did both because she believed it was correct to do so.

It would be wrong of me to patronise her with excuses as I seem to have been doing -ageism? She supported Clinton because feminism trumps anything or, worse still, because she agrees with the Atlanticist position uncritically supporting the US in its interventions. Did she pick this up from Glasgow University? Were they feeding the students with US exceptionalism in the 1980s, just as they previously fed my history teachers with British exceptionalism and Scottish history curricula, as late as the 1950s? Remember, they nurtured the dread Niall Ferguson.

Her enthusiasm for the Kissinger book was because he exonerates the equally psychopathic and hawkish Madeleine Albright, she of: ‘The deaths of 500,000 Iraqi children was worth it for Iraq’s non-existent WMD’s!’

Does the FM applaud women, any women, achieving high position, regardless of the deeds they do? It seems she does.

I joined the SNP as an anti-imperialist first and foremost. I think my values are widely shared across the Yes movement and in the party. Are the First Minister’s?

29 thoughts on “Do we need to talk about the SNP leadership, now?”