It’s not ‘natural’ is it? They’ve done something to the images of Salmond and Sturgeon to make them look disturbing in some way. Sturgeon, in particular, looks almost ghoulish or even, diseased. The presenter looks suitably nervous. Why have they done this? Why have they modified the photographs? The report is about the imagined ‘civil war’ within the SNP so, I’m guessing, the producer wanted the images to ‘fit’ the story in some melodramatic but immature way. Remember this is not a student project or the work of the Sun or the Daily Mail. It’s in a mass broadcast by a public service broadcaster with a royal charter requiring it to inform us. What information is communicated to us by changing photographs to make those represented look unwell or evil in some way? Surely, the images unmodified, should have been used to more accurately represent the characters. BBC Reporting Scotland has ‘previous’ on this: 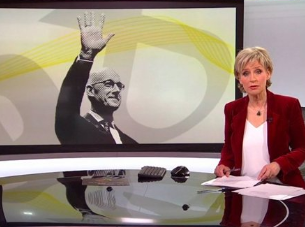 Why was this earlier shot taken from that angle, enlarged, cropped and reduced to black and white? Many commentators saw, instantly, similarities with images from Nazi Germany in the 1930s. I wrote to complain at the time but was fobbed off as if paranoid. Similarly, BBC Newsnight produced this image of Jeremy Corbyn: 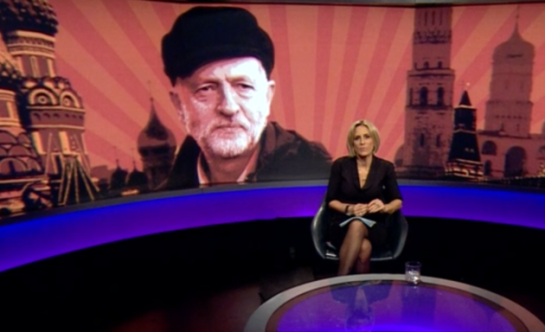 There was much comment at the time with Labour-supporters angered by the all-to-obvious association of Corbyn with the Soviet Union and with its leaders such as Lenin. Once more, the BBC rebuffed all criticism as over-reaction and reading into the images messages they had not meant.

The mainstream UK media’ bias against, and the demonization of, Corbyn was to be empirically proven by the London School of Economics:

In Scotland, similar evidence of bias by BBC Scotland against the SNP, has been offered, in my own research:

Propaganda or Professionalism on Pacific Quay?

Why do these images matter? In its responses to the earlier images of Swinney and Corbyn, the BBC seemed to be suggesting that these are merely decorative or illustrative in a superficial way, but they are undeniably negative and reduced from the full colour and warmth of life. It matters because, unlike words which are absorbed slowly, with time for conscious deliberation, and which our conscious mind can resist with contrary evidence, there are no defences against these visual images. They are absorbed by our unconscious mind in less than a second and they impact centres of emotional processing directly and powerfully. We know how difficult it is to change someone’s opinions with a direct strategy using factual evidence, but this strategy enables ideas to bypass all rational defences as if they were not there.

This is not just my thinking. From a former professor of media studies in Canada:

‘Images are able to convey information quickly and evoke deep emotions in their viewers. This power of the image derives from its ability to convey a message all-at-once, as a gestalt or whole chunk of meaning. The way the brain processes images also contributes to their power: we can see, remember, and be moved by an image that we have not really thought about. It can enter into consciousness below our analytical radar–or be moving too quickly–and continue to influence us from our subconsciousness……[W]hen images are used for political purposes and disseminated through mass media, their power to persuade is increased dramatically.’

From the world of business, where the propagandising is unashamed:

‘Words actually don’t exist … to our brains, at any rate. We don’t see words as a series of letters. We see them as pictures. However, tests have shown that people can remember more than 2500 images with at least 90 percent accuracy for days after initial exposure.’

I’m sure you see the possibilities here. Where a ‘floating voter’ is subject to these images, in addition to the usual textual bias in reporting, a developing hostility to individual politicians, deep in the subconscious mind but influencing, almost determining, conscious thoughts and behaviour, the impact on voting behaviour becomes almost inevitably negative with regard to that politician’s party – SNPbad?