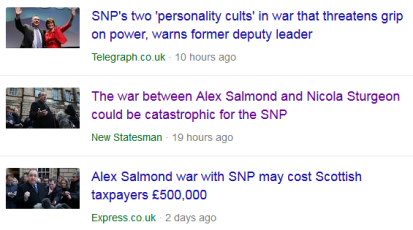 The New Statesman is no friend of the Independence movement, but it has given space to some writing sympathetic to it and none of the mad frothing stuff we’re getting currently around Salmondgate. For example, in November 2018, we could read Nicholas Lezard writing:

‘I wasn’t pro-independence when there was a referendum on it, but now I’m here I begin to see the attraction, especially as England seems to have gone mad.’

However, giving space to serial raging distorter, Chris Deerin, they join the mob desperately trying to fabricate civil war in the SNP:

‘The war between Alex Salmond and Nicola Sturgeon could be catastrophic for the SNP. If the sexual misconduct allegations against Salmond are not proven, his successor will be left helplessly exposed.’

I’m only doing this because I’ve got a lingering residual fondness for the New Statesman, which I subscribed to in the pre-Blair days, up to 1997. Pre-Internet, there wasn’t much else to read, and they sometimes featured the great Neal Acherson. I cancelled it when they thought it clever to let Alistair Campbell edit it and then to let Tony Blair write for them. They kept sending me free copies with invitations to re-subscribe but they’d crossed my red lines and the independence movement pulled me back.

I won’t take long with this. Just a few points:

‘His tactics – and he is good at tactics – have been to obscure the grim nature of the allegations by going after flaws in the process. His crowdfunding of £100,000 to cover his legal fees may leave a bitter taste in the mouth – Salmond is by most people’s standards well-off – but it has been effective. The step seems to have been made for political as much as financial reasons, to show that even amid this crisis he could command the loyalty of independence supporters. And they flocked to him – 4,000 people donated.’

‘Grim nature?’ He has been accused of sexual ‘harassment’ and not ‘assault’ as one Labour lackey tweeted today. ‘A bitter taste in the mouth?’ Why one earth should he not crowdfund? I contributed. His costs could have been enormous. ‘They flocked to him?’ There are 125 000 members. 1.6 million voted Yes when he was First minister. In that context, it was no clucking flock.

‘His latest tactic, having won his case on a technicality, is to force the resignation of the Scottish government’s permanent secretary, Leslie Evans. Evans drew up new procedures for handling sexual harassment claims shortly before the allegations against Salmond were made early last year.’

‘A technicality?’ It was a significant error and an ethical failure by the civil servants involved. ‘Scottish Government?’ Salmond knows, and many supporters know, that Evans is technically part of the Scottish Government and that Sturgeon has to support her staff in public, but they also know that Evans is the target along with the UK civil service. As things proceed Sturgeon’s signing-off the policy will be distinguished from Evan’s misuse of it.

‘Salmond and Sturgeon are now at war over Evans’s future. The former first minister says his victory is an “abject humiliation” for the Scottish government and insists Evans must “consider her position”. The current First Minister, who appointed the permanent secretary, and who signed off the new harassment procedures, is standing by her woman.’

Well of course she is standing by Evans in public but when politicians are let down by civil servants, they are already on the way out. Evans is replaceable, but the party apparatchiks will make sure no dynastic war ensues. Salmond is hurt but it will pass once Evans has gone, the Indyref2 campaign begins and his powers are wanted.

Finally, the media gaze will turn. What fascinating horrors do the Tories have in store for us in 2019?

15 thoughts on “New Statesman lets itself down with ‘SNP War’”