BBC Scotland’s report today on the research showing a 75% increase in the number of children in care since 2004 is, typically, short on context or critical assessment. The research from the University of Central Lancashire showing this increase to be greater than in other parts of the UK was led by an academic whose research ‘focuses on the overemphasis on risk in the child protection system’ was accepted uncritically.

Reader comment: I too would have thought that it is the number of children who are NEEDING to be taken into care that we should want to reduce. Seeking to reduce the number IN care without due attention to evidence on the nature and scale of need is an objective with obvious potential for bad, even if unintended, outcomes.

I’m no expert here but isn’t risk to the child easily the most important, critical, factor in this and might the increase in Scotland have been the correct thing to do? See this graph and comment on the number of children on the child protection register in the four nations of the UK: 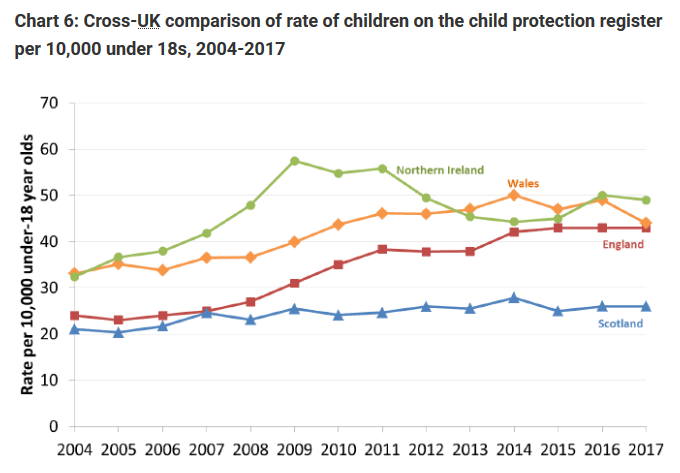 4 thoughts on “Is BBC Scotland’s promotion of call to reduce number of children in care dangerously ill-informed?”