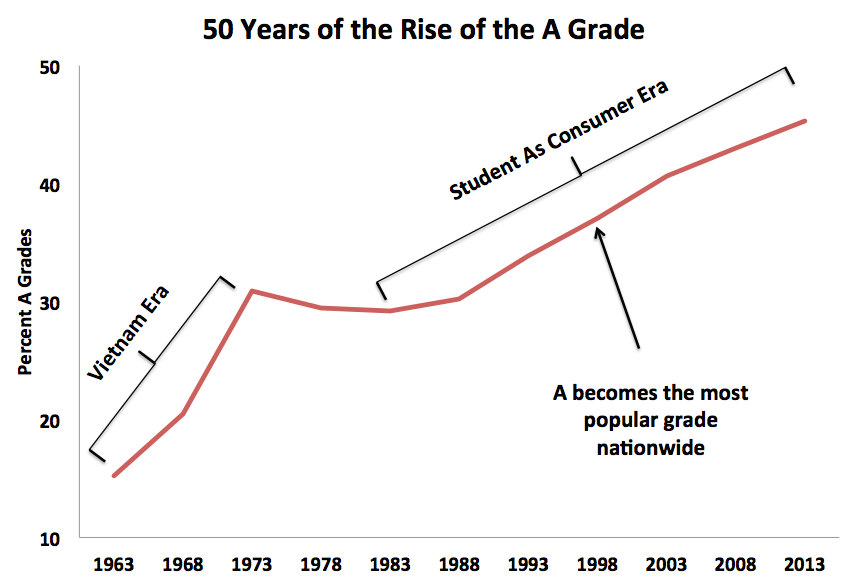 In 2008, 25.3% of All English A-level passes received an A grade. This triggered a call for readjustment to avoid accusations of unjustifiable grade inflation. In Scotland, the then Education Secretary, Fiona Hyslop, appealed for the Scottish system not to be dragged into the annual row about exam standards in England.

This year, we see:

‘Attainment in Higher exams has fallen for the third year in a row, new figures have shown. Scottish Qualifications Authority statistics show A-C passes at Higher are down marginally by 0.2 per cent between 2017 and 2018. The figures, updated from August to take account of issues such as appeals and late results, show there were 55,083 band A passes at Higher this year, 48,592 at B and 44,274 at C.’

According to the Labour Party’s education spokesman in the North Britain (Scotland) region, Iain Gray: ‘The SNP should be utterly ashamed of these figures.’ Gray called for additional resource to further inflate the results.

However, renowned authority on criterion-referenced assessment and former visiting research fellow at the University of the Best of Scotland, Professor, Doctor, Herr Johann von Rubrikson has accused Gray of being a dummkopf who doesn’t know his Harris from his Elba. In 2015, Prof Rubrik demanded that the Scottish system act to preserve its reputation, at least in Baden-Württemberg, as being the next toughest, after that in Baden-Württemberg, where only 4% of students get an A pass. Rubrikson has commended the efforts of the SNP to push A-passes down for the third year in an attempt to protect the reputation of the Scottish system, in sharp contrast to the English system, where according to Prof Rubrikson’s research team, Richard Leonard  got a C pass in GCSE Arithmetic.