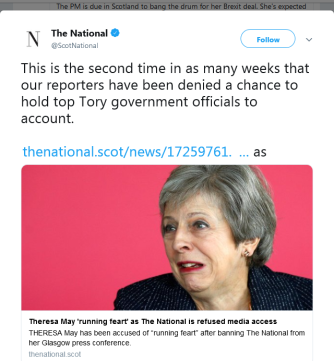 The National is denied access to report critically on the PM’s last-minute Northern campaign.

I’ve written before expressing reservations about recent converts to the cause such as Kevin Mckenna and Michael Fry, who have found shelter at the National. McKenna’s fluidity enables him to continue to write for the Herrod, Observer and Guardian regardless. I’ve doubted the effectiveness of the ‘intellectual’ and ‘professional’ strategies of those such as Common Space and the Herrod’s Iain Macwhirter. I’ve defended the Yes movement’s wild and hairy but impressively analytical and effective, shock troops at Wings, against the accusations of an unhelpful lack of good manners by some of the former. I’ve been characterised as a narrow zealot by the former and told to ‘up your game’ by the Rev Stu at Wings.

The National’s first editor, now Editor Emeritus, Richard Walker, made it clear they would have space for criticism of the SNP. While still editor at the Sunday Herald, he had refused to report my 2014 research, insisting that it had not demonstrated bias at the BBC to his satisfaction. Richard maintained warm connections with BBC Scotland throughout and appeared often on it. My colleagues at UWS who worked with the BBC were told to stay away from me if they valued those links. Richard, as explained by Chomsky, is a member of those media elite groups interlocked with other elite groups across the establishment. He and other senior staff in the National/Herald teams are, an at least Shetland-sized, Trojan Horse presence, within the Independence movement and remain so, even though they may feel they have reinvented themselves at the conscious level as pro-independence. Their positioning depends primarily upon a deep need to self-preserve and is fluid enough to adjust to changing circumstances. Should we fail, watch them slide back into some, no doubt subtle, but in essence, Unionist place. Should we succeed, watch them slither into positions of influence in post-independence Scotland their last surface traces of Unionism shed.

I have been and will be again, accused, of paranoid, even deranged thinking here, but that’s how establishment figures, even lesser ones, work to destroy any who dare to criticise them: ‘First they ignore you, then they ridicule you, then they fight you, and then you win.’

Hahaha, he’s comparing himself to Gandhi! What next, Christ? Can lesser figures not use the quote? Is it reserved only for the greater heroes? I have lost quite a lot of weight but do not yet sport a beanpole.

This report in the National required me to doubt the National editorial team focus on the core target of winning independence. The BMA report is almost certainly unreliable and even if it were not, giving it space seems a dubious decision if you are aligned wholeheartedly to the cause of Scottish independence.

The key points in the National report of the BMA survey:

We’ve been here before, several times, with the BMA and BBC Scotland presenting unsound research findings to undermine the reputation of NHS Scotland and, by association, the SNP administration.

I’ll keep this short. Why is the BMA ‘research’ of little value in informing us about the true state of NHS Scotland?

To conclude, why did the National report this and report it uncritically? Whose side are they really on?

9 thoughts on “Should the National have denied the BMA the chance to spread anxiety about NHS Scotland?”