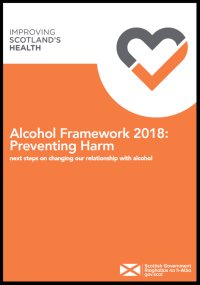 ‘The Scottish government has published a new alcohol framework 2018, outlining 20 key actions that seek to ‘reduce consumption and minimise alcohol-related harm arising in the first place’. The strategy has three key themes including ‘reducing consumption’, ‘positive attitudes, positive choices’ and ‘supporting families and communities’, and coincides with the latest figures on alcohol-related hospital admissions in Scotland of 35,499 in 2017/18.  The strategy follows on from the implementation of Minimum Unit Pricing (MUP) earlier this year after a long running legal challenge by sections of the alcohol industry.’

Scottish Government policy, based on science, has previously been praised by public health groups especially when compared with the Westminster approach based on unscientific local partnerships and self-discipline. The Alcohol Policy Unit view of the latter is:

‘A new national alcohol strategy is reportedly in development for England and Wales, though there have been few signs that calls for it to follow a more evidence-based approach will be heard. Minimum pricing appears to be off the table according to a recent parliamentary answer stating “the new strategy will not include a commitment to introduce minimum unit pricing in England at this time”, but that PHE would review the impact in Scotland following its introduction this year, despite Wales and Ireland taking steps to implement MUP. Earlier this month the Health Secretary Matthew Hancock said people should take greater personal responsibility for their health to take pressure off the NHS, provoking dismay from behaviour change academics and alcohol groups. Hope that the strategy will halt the ‘crisis’ facing treatment services may be one area where advocacy groups will continue to focus efforts on.’