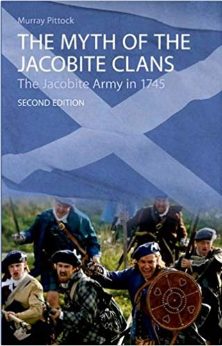 ‘Pittock’s sound scholarship demonstrates the extent to which Scots supported the 1745 rising, and its purpose in dissolving the Union. This book offers a point of departure for a reconceptualization of Scottish history.’ (Jeremy Black, U of Exeter)

Note: I’ve learned from experience that many of you reading this blog are ahead of me on many topics and so, I understand, that you may already have a better or even a contrary grasp of this. By all means, add your thoughts below. As always, my posts are only starters.

As I stumble toward my allocated years, I continue to learn things about Scotland which I maybe should have known earlier. I did Higher History at school and by 1968, I knew far more about the tragic history of Poland than I did about any aspect of Scottish History. I could even draw accurate maps of the partitions of Poland by their predatory neighbours, Prussia, Austria and Russia. Only a few years ago, I discovered that my teacher, Mr Danskin, had a surname suggesting origins in the city of Danzig, today Gdansk!

So, it was in the years that followed, that I began to learn what a good Scottish, republican, socialist education system might have provided. Perhaps predictably, I started from the edges and worked inward. First, though I learned what you might term a ‘People’s History’, seeing my own working-class experience, of tenement life and of relative poverty, in a wider theorised Marxist explanation of capitalism and its victims. Second, I learned of the horrors of empire, in places such as India, in the Middle-East and in Kenya, to name only a few. Then, perhaps, stimulated by the Troubles in Ireland, so visible in everyday media coverage, I began to learn another history. Coming from a protestant, social and educational background, I knew nothing worth knowing. Reading Irish sources, I saw the same imperial practices that I had read of in India or in Kenya. As an academic in the 80s, 90s and 10s, attempting to broaden and to make more critical, the perspectives of education and media students, beyond their understandable but limited obsessions with practice in the short-term, I developed my own understanding of the later, globalised, form of capitalism which so constrains all of our choices including even what we think we can think about.

Now, in retirement, I come across a book which reveals to me another shocking gap in my understanding and this time, one that is geographical, historically and theoretically so close to where I stand today, deeply embedded in the contemporary movement for Scottish independence – the Jacobite Risings of the 17th and 18th centuries.

The book in question is Murray Pittock’s second edition of his 1995 treatise, ‘The Myth of the Jacobite Clans’. In 1995, I had just been promoted, beyond my maturation and emotional intelligence, to be head of a university department of 26 utterly unherdable souls. So, challenged by the experience, I regularly cycled home at lunchtime for a double vodka and packet of extra-strong mints. The cycling was good for me. Until I managed to change horses, ten years later, from the management to the research lanes, I missed a great deal of cultural importance as I hardened my heart to deal with such as budgets, evaluation and staff deployment. I did things in those years which I must pay for later in any final assessment of my character.

This book has somewhat gobsmacked me in its revelation of my sheer ignorance and narrow assumptions of the more nuanced and complex nature of the risings labelled ‘Jacobite Risings’ rather than ‘Wars of Independence’.

I won’t hazard a fuller account here of the book’s 229 heavily referenced pages but merely give you a very quick and much-reduced overview of the myths Pittock tackles, before you, as I sincerely hope you do, buy it.

As you might expect the contents page tells us what the central myths are. Selecting only aspects of these, they are:

First, there is the myth that the Jacobite army was, only, a Highland army. Pittock, with strong evidence, suggests that it was, at the very least, 50% made up of ‘lowlanders’ and that orders were, in the main, given in English. Fascinating, for me, is his revelation that highland dress was commonly worn by the lowlanders as a uniform and to avoid being mistaken for the Union army by the actual Highland battalions.

Second, he tackles the myth, popular with those who wish to downgrade their significance, that few Scots supported the risings. Again, fascinating for me is the way he extrapolates from the many reports of numbers to show how the risings were actually well-supported when you compare them with the earlier, state-sponsored, Covenanter armies or with the, per head of population, very small British army in the 21st Century.

Third, he demolishes, for me, the myth that the risings were only strongly supported in the Highland and Gaelic-speaking parts, offering extensive evidence of their considerable support except, ironically where I write this, in the South-West.

Fourth, he demonstrates the inaccuracy of the propagandistic tendency to characterise the Jacobite armies as undisciplined, charging and sword-waving barbarians. We read of the sophisticated battle tactics and modern firepower, needed to, of course, explain the repeated earlier victories against supposedly more advanced Union armies.

Finally, and perhaps of most interest to us, in the contemporary independence movement, Pittock challenges the narrow propagandist explanation, still popular with Unionists, that the risings were almost entirely about the restoration of the Stuarts and of Catholicism. With extensive evidence, he concludes:

‘Their aims were national at least as much as dynastic; their defeat had consequences for the future of Scotland as much as the Stuarts. That was why they were supported in such numbers, why even Scots who welcomed their defeat might also in a manner regret it, and why the saltires, muskets and bayonets of the Jacobite Army have been so long shrouded by British history in the Children of the Mist’s performance of the Myth of the Jacobite Clans.’

27 thoughts on “Were the Jacobite risings as much about dissolving the Union as Stuart restoration?”