Based on a sub-sample of 171 Scots in the YouGov / Times Westminster Voting Intention Survey, the SNP seems to continue to defy electoral gravity, with 47% intending to vote for them. This would take SNP representation at Westminster up to 56 and remove the last Scottish Labour MP.

In sharp contrast, for Holyrood voting intentions, a Survation / Daily Record full-sample of ‘more than 1 000 Scots’ suggests SNP support in a Holyrood vote, down 8.5% to 38%, the loss of 11 MSPs and the loss of a pro-independence majority. For Westminster, this poll has the SNP holding at 36%. 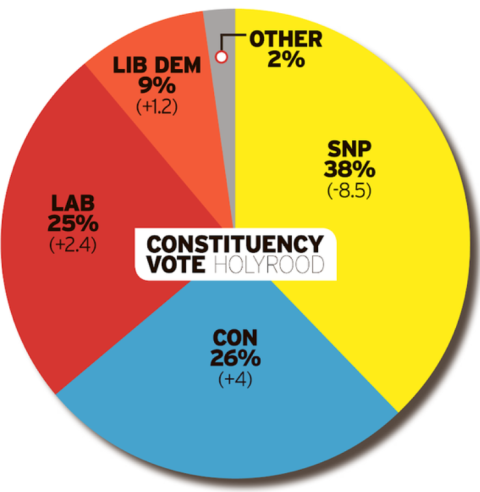 However, though a poll of more than 1 000 should be more reliable than a sample of 171, there are good reasons to think differently because of the methods used to gather the information. Most important is the difference between online and landline telephone surveys, used respectively by YouGov and Survation. Regular readers of TuS will have seen this before.

Telephone surveys tend toward exaggerating conservative or no change outcomes such as a NO vote in Scotland 2014 or, as they clearly did, a Remain vote in Brexit 2016.

First see these reservations, from YouGov, about telephone interviews from the opinion polls which got the EU Referendum so wrong:

‘There’s a big difference between the online and telephone polls on the EU referendum – with online polls showing the sides neck-and neck and telephone polls showing about a 15% gap in favour of ‘remain’. Why? It’s striking that both methodologies right across the different polling companies give about the same number to the ‘leave’ campaign, around 40%. The difference is in the ‘remain’ number, which is around 52% from the telephone-polls, but only 40% for online polls.’

So, commonly, telephone surveys generate conservative, negative or status quo returns. Respondents are more likely to say no to a question about a big change of some kind.

In another YouGov report we read:

‘Now however we can reveal a real, significant and evidence-based difference between the two methodologies that explains why they are divergent and why it is online that appears to be calling it correctly.’

See this online, self-selecting, survey report from the, far from sympathetic to Scottish Independence, Scotsman newspaper in June 2016:

‘Nearly six out of 10 Scots say they’d vote Yes in a second independence referendum. In a clear reflection of the growing backlash north of the Border to Thursday’s Brexit result, a ScotPulse online survey of 1,600 Scottish adults on Friday (24 June) showed that 59% of Scots now back leaving the UK.’

Further, not everyone has a landline to be called on. Roughly 20%, especially younger and economically disadvantaged citizens do not have one so cannot be surveyed. As the Scotsman report points out, the young and the less-well-off are more likely to prefer independence.

Here’s an even more interesting thought, from the USA admittedly:

‘There now may be something unusual about people who are willing to answer the phone to talk with strangers, and we should be sceptical about generalizing from the results of these surveys. It is possible that the new habit of non-phone-answering is evenly distributed throughout the population (thus reducing this as a sampling confound), but this seems unlikely.’

Now, are NO voters more unusual than YES voters?