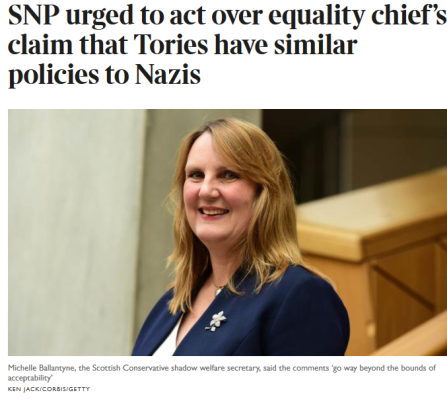 In the Times today and repeated elsewhere:

‘Nicola Sturgeon has been urged to investigate comments made by the SNP’s newly elected equalities spokeswoman after it emerged she suggested that Tory welfare policies towards the disabled had echoes of Nazi Germany.’ 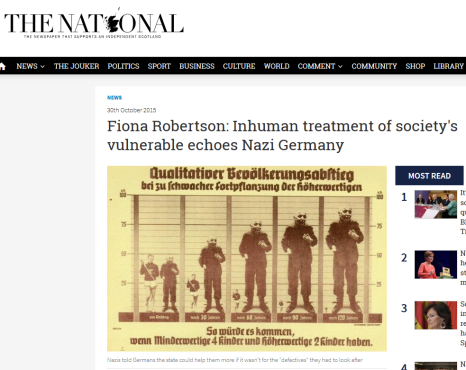 ‘In the midst of the most controversial Labour Conference in recent times, Sioux Blair-Jordan, a Labour disability rights campaigner, gave a powerful speech about the dehumanising narrative regarding sickness and disability emanating from the Government, and the risks disabled people face if the Conservative Government follows through on its campaign pledge to dissolve the power of the European Court of Human Rights in the UK.’

‘When Blair-Jordan said that if we removed the influence of the Court of Human Rights, disabled people may as well walk into the gas chambers now, she wasn’t being flippant. Most of us don’t think that death camps will be built to kill us all, but many of us do believe that the Government will continue to pursue a path which they know makes life untenable for us. They will remove every other option available for anyone who doesn’t have outside support.’

I’m not sure Fiona entirely justified the use of the Nazi comparison, but I think it can be and the beginnings of the case can be found in the UN’s recent condemnation of the UK government, though without Nazi references:

‘UK welfare reforms have led to “grave and systematic violations” of disabled people’s rights, a UN inquiry has said. Changes to benefits “disproportionately affected” disabled people, the UN Committee on the Rights of Disabled Persons (CRPD) found. The UK was the first to be investigated under a UN convention it has been signed up to since 2007. The committee launched an investigation in 2012 after receiving evidence from disability organisations about an “alleged adverse impact” of government reforms on disabled people.’

Indeed, the safest road to Hell is the gradual one – the gentle slope, soft underfoot, without sudden turnings, without milestones, without signposts (CS Lewis 1940)

Fiona Robertson wrote of the ‘echoes’ of Nazi Germany and that’s the key point here. She wasn’t, of course, arguing that the UK Tories are treating the disabled in ways close to those employed by the Nazis but that, perhaps from some distance, we can still hear their echoes when we consider what the Tories have implemented today, with harsh assessment procedures, requiring difficult travel to formal places of assessment, by officials who cannot know the complexity or the subtlety or the inconsistency of symptom manifestation. Multiple examples of the unfair, cruel practice being implemented have been published. See:

As CS Lewis reminds us, the first steps toward Hell or Nazi Germany need not be big ones. The journey can start with these assessment practices and a gradual increase in general intolerance toward the disabled in the form of questioning their need for parking spaces or tolerating verbal abuse directed toward them. Over time, as they are de-humanised, and the costs of caring are questioned we begin to hear again of proposals to make abortion more acceptable where disabilities appear even late in pregnancy. Later, ‘with the best of intentions’ often found paved on the way to Hell, parental decisions to sterilise disabled children are encouraged.  Later again, as not enough parents take it up, state-controlled forced sterilisation is introduced. By this stage Nazi Germany was on the way to the death camps. 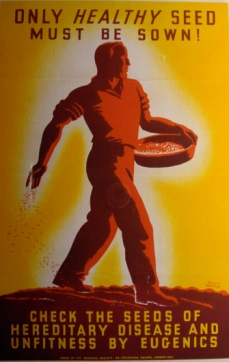 ‘In an effort to prevent unfit offspring from being born, sterilisation laws were introduced in many American states to stop certain categories of disabled people from having children. The first such law was passed in Indiana as early as 1907. This was 26 years before a similar law was introduced by the Nazis in Germany in 1933, The Law for the Prevention of Progeny with Hereditary Disease. In their sterilisation propaganda, the Nazis were able to point to the precedent set by the United States.’

Mistreating the disabled can start a wider trend

‘Swedes have been shocked over past days by revelations from Maciej Zaremba, a journalist, that Swedish governments sterilised 60,000 women to rid Swedish society of “inferior” racial types and to encourage Aryan features. Maciej Zaremba, whose revelations have been published by the liberal newspaper Dagens Nyheter, said that Sweden, Norway and Denmark pioneered racial cleansing “sciences” after the First World War. In Sweden, the sterilisations began in 1935, peaking in 1946 and were not stopped until 1976. Officially voluntary, victims say that they were ordered to sign permission slips or risk losing any other children they had and all benefits.’

The echoes of Nazi Germany can still be heard if you listen carefully as they echo down a long dark tunnel. There are other echoes too from the dark histories of America, Sweden and others. When they call us, we can get there soon enough with tiny steps along a gentle and almost unnoticeable downward slope. We only have to take one step then the next one will seem just as small. The Tories may not realise it, but they are just one step ahead of us into the darkness, and calling back for us to follow them.