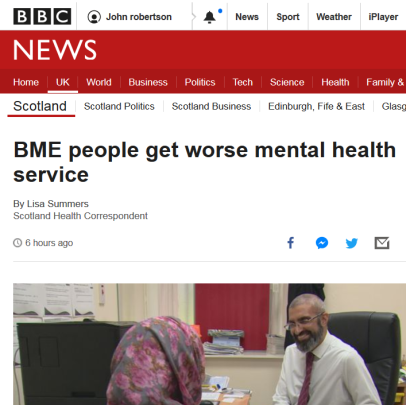 In its regular series ‘Early Morning Scares for the Vulnerable’, to be taken 9 times every day, today’s episode was:

Based as always on a scientific sample of something like ‘some of those who work in the community’ and who have spoken to BBC Scotland, they were able to claim:

‘Black and minority ethnic (BME) groups in Scotland face unequal access to mental health services, people working in the community have told the BBC. They said a lack of targeted support also resulted in worse treatment options. Consultant psychiatrist Prof Sashi Sashidharan said there was a huge gap in the data available on ethnicity.’

Leaving aside the prof’s apparent disregard for the discriminatory nature of collecting data on ethnicity alongside that on health concerns, the report lacks the required evidence-base, beyond the usual anecdotal sources.

As a consequence of their failure to research the topic properly, BBC Scotland find themselves making incorrect comments such as:

‘They said that meant more people were being sectioned or experiencing more extreme forms of psychiatric treatment.’

As often before, quite speedy searching finds proper research which contradicts the BBC report.

I am of course not doubting the sincerity of the doctors interviewed nor the probability that discrimination against minorities extends into this area too, but I am, as ever, doubting BBC Scotland’s motives and their competence.

‘Fundamental facts about mental health 2016’ by the Mental Health Foundation, based on extensive studies by recognised researchers, provides us with reliable evidence and it often contradicts the BBC report.

Fewer people being sectioned in Scotland?

With regard to the claim of more BME people being sectioned and experiencing more extreme forms of treatment, see this:

‘Between 2014 and 2015, there has been an increase in the total number of people admitted under the Mental Health Act. In England this increased by 10% and in Wales, it increased by 14% while Northern Ireland and Scotland saw a decrease of 0.9472 and 5.7% respectively.’ (p73)

So, were the sources doctors who had worked in NHS England, where such practice may well be increasing?

So, there is a marked trend in Scotland toward reduced admission, including sectioning, in Scotland, contrary to the trend elsewhere in the UK. Why might this be? See this:

‘Improving Access to Psychological Therapies. The IAPT programme was launched in 2008 with the aim of improving the quality and accessibility of mental health services in the UK by focusing on providing improved access to psychological treatments – primarily talking therapies (e.g. CBT, counselling and self-help support). IAPT pathways vary in each of the devolved nations. For instance, Scotland has set Local Delivery Plan Standards for NHS boards to increase access to psychological therapies.’ (p74)

Is the situation in NHS Scotland once more in advance of the non-Scottish parts?

What about funding of Mental Health care in Scotland?

So, under SNP government, the funding of mental health care has been sustained against a background of falling funding elsewhere in the UK.