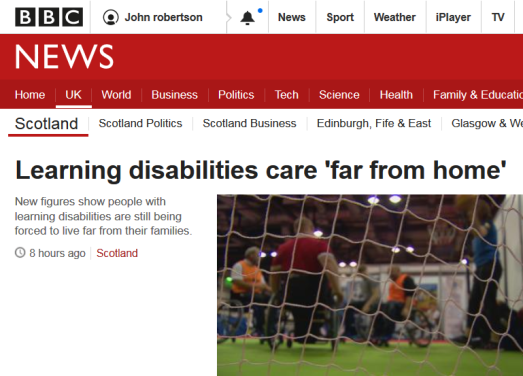 At 06:29 am, headlined and repeated throughout the morning, we heard:

‘There are still 79 [Scottish] people with special needs and autism in care in England and Wales.’

I don’t mean to diminish the suffering involved for these 79. I just want to understand how big a problem this is at a national level. Comparable figures for England & Wales don’t seem to be available. Is that because BBC Salford and BBC Wales don’t have an awesome ‘disclosure team’ burrowing away under the foundations of trust in government? Makes you feel your licence fee is worth it. Using your own money to make you feel anxious in the morning.  Also, the longer website piece is geography-free, so we can’t see how many are, for example, placed just across the border in a neighbouring region.

‘Children in care far from home ‘at risk’, charities warn. Charities are warning that thousands of children placed in care far from home are more vulnerable to criminality, drug abuse and sexual exploitation. A third of the 64,000 children in local authority care in England and Wales live outside their local area. The charities say long-distance placements often traumatise children who are already damaged and vulnerable.’

So that’s around 21 000 children in care placed away from home. Is 79 evidence of a crisis in Scotland?

Come on, BBC Scotland, surely these people are also at risk of criminality and drug abuse too?

Why does the early morning repeat dose matter? See:

The Power of Early Morning Nightmares: The consequences including even death at home for expectant mothers of BBC Scotland’s reporting of one stillbirth