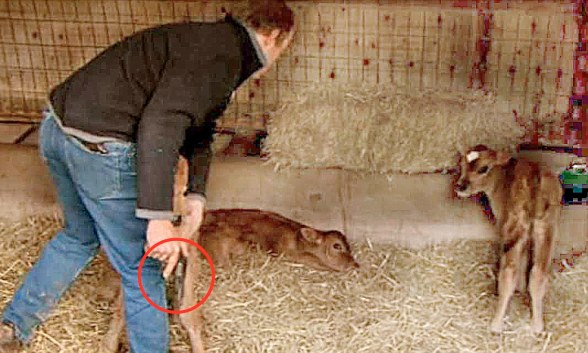 ‘A ferry operator [P&O] is to stop carrying calves to Europe after animal welfare concerns were raised in an investigation by BBC Scotland’s Disclosure team.’

The decision by P&O is a panicked reaction to ‘Disclosure: The Dark Side of Dairy’, a deeply flawed and confused piece of work, already covered here:

Most important, was the BBC team’s failure to provide any concrete evidence of the transport of the very young calves beyond Northern Ireland, after a 2 hour-only journey. Finding that she had followed the same lorry from Larne to France, but now containing much older calves, we were asked to accept as evidence only verbal conversations she claimed to have had. I was not convinced.

BBC Scotland’s team knew that the only alternative to transporting and fattening calves for later slaughter is the shooting of the calves, within days of their birth. Farmer’s representatives made this clear and expressed their disquiet at having to choose the shooting option. It must be a deeply harrowing experience to shoot a virtually new-born baby animal and, from a waste management perspective, the incineration and the burial of ash from thousands of calves, plus the failure to add all of that food into the chain seems utterly indefensible.

In their populist and shoddy reporting, BBC Scotland seems not to have looked at evidence, properly or perhaps at all. See, for example, this, available to them in March:

‘The number of male calves being killed straight after birth is on the rise again, despite efforts by the dairy industry to end the practice known as ‘the dirty secret’. A Guardian analysis shows that it can cost a farmer up to £30 per calf to sell it on for beef or veal, while early disposal costs just £9. A growing number of farmers feel compelled to take the latter option, with 95,000 killed on-farm in the most recent set of figures.’

BBC Scotland has rushed in here, ill-informed, seeking popular approval and, if they can, harm for the reputation of the Scottish Government. The costs may be considerable, but will they face any?

16 thoughts on “Has BBC Scotland caused the death by shooting of thousands of days-old ‘boy’ calves and an indefensible waste of food?”