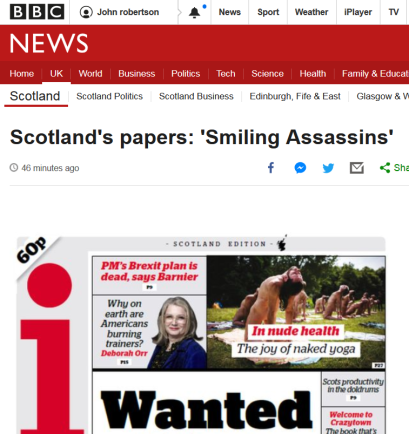 In a sign that all is not well within the ranks of our usually loyalist media, it seems a BBC webmaster has revealed her SNP sympathies with the above headline, confirming what we already knew, of course. Churnalists at the Herald and the Scotsman will be deeply hurt by this betrayal which comes from former colleagues, university, school and playgroup chums.

There is of course a certain irony in BBC Scotland using the term ‘smiling assassins’ when they are host to Brian Taylor whose regularly chummy grin with Nicola Sturgeon is soon replaced by the smiling assassin as he courts the favour of Jackie Bird. It’s not going to happen Brian. She still thinks she’s a top bird and out of your league.

This is the second clear sign of division after Kevin Keane, Acting Junior Assistant Temporary Editor, for the Countryside, warned on Re-parting Scotland (5th June):

‘Every day of every year, we produce rubbish.’

Kevin’s English accent is, of course, a clever ploy. See this for more:

Footnote: Reliable sources tell me that the webmaster is actually the grand-daughter of a prominent BBC editor and I can reveal she is ‘Ronalda ‘the Dude’ Smith!