In the Independent today:

‘England has been “left behind in the race” to resolve its social care funding problems, a charity has warned. Age UK said an entire generation of elderly people had “lost out” after various proposed care reforms had been left to “gather dust”. The comments came after a new report compared social care systems across the UK, Germany, France, Spain, Italy and Japan.’

See that ‘across the UK’? There’s no mention of it again in the Independent report. I found the original. Scotland, Wales and Northern Ireland are nowhere to be found so I guess ‘across the UK’ means ‘across England’, once more. 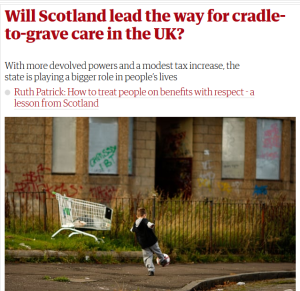 The Age UK research did not consider the Scottish model at all yet in the Guardian more than a year ago, we could read:

‘Scotland is refashioning social provision in the UK. Already the state provides free personal homecare for older people alongside free NHS prescriptions for all. With local councils and housing associations, it has begun building 30,000 social homes over a five-year period and, unlike England, it has abolished the sale of council houses to tenants. Under new legislation, it is moving to align health and social care through 31 integration authorities charged with delivering a £8.5bn budget tailored to local areas.’ 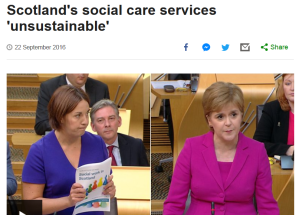 And, two years ago, Labour Scotland Branch’s awesome Kezia ‘Eeyore’ Dugdale, with BBC Scotland tugging on her bridle, was raging against the light, any light, and the reckless unsustainability of the SNP’s good works:

‘Scotland’s social care services ‘unsustainable’ The current system of social care in Scotland is “unsustainable”, according to a financial watchdog. The Accounts Commission said an additional £667m would be needed by 2020 to maintain current levels of service, and called for a “frank and wide-ranging” debate on the issue. It said an ageing population, budget cuts and legislative changes were putting pressure on the system.’

Kezia has been replaced as visiting editor at the BBC by the equally querulous Jenny ‘What’s the’ Marra but she seems focused on more important matters such as NHS salaries being higher than hers.

Anyhow, surely seven years since its implementation was planned and then phased in, by  four years ago, Scotland’s approach to the funding of social care might have interested the English researchers? Seemingly not. I guess travel jaunts, travelling expenses and other perks matter a lot.

However, in May 2018, Scotland’s ‘own’ Professor Bell made no mention of sustainability problems in his investigation into costs.

Finally, the London-based, Kings Fund research group, did have a look at the Scottish context but reported in July 2018, too late for the Age UK team to read it (?). They were not interested so much in funding as in the planning, consultation and implementation process but had important thoughts for other research teams and of course for the Independent and the Guardian:

‘Imagine a place where you could debate and refine policy on integrating health and social care for three years, leading up to legislation. And then, organisations and staff could take a full year to learn new ways of working together in shadow form, with unwavering political support, before becoming accountable for bringing services together to improve health, care quality and value. There’s no need to imagine; that’s what is currently happening in Scotland.’

2 thoughts on “Looking south only, NHS England is ‘left behind Germany, France, Spain, Italy and Japan’ but Scotland is both ‘just behind’ and well ahead of them!”